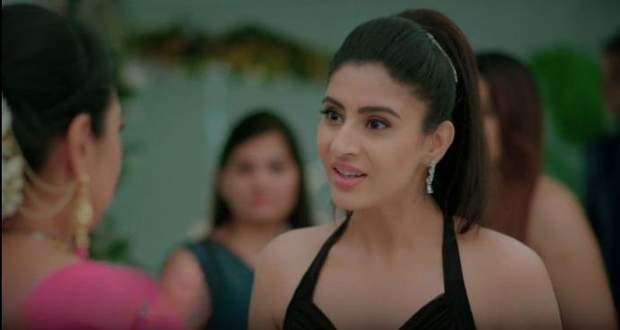 Today's Anupama 14th June 2022 episode starts with Anupama requesting the house guests to convince them for the puja and orders the staff to take out the alcoholic drinks as alcohol is not allowed.

Meanwhile, Barkha is stunned to see Anupama ordering to take alcohol out and requesting the guests to take off their shoes for the Puja thinking that her plan for the party is flopped because of Anupama.

Later, Anuj and Anupama clear the area for the Puja and help the staff with mopping the floors while Samar and Toshu help in laying down the carpet and mats for the Puja.

On the other hand, Leela points out at Barkha being too demanding while Vanraj says it's because she has a different culture in the US.

Vanraj says they do not have any relationship with this house and only Anupama is important for them.

On the other hand, Kavya says she liked Anupama's family and house and Anupama is lucky to have an educated family and a big house despite being an undergraduate.

Meanwhile, Leela notices Pakhi and Adhik initiating conversation and Toshu and Samar getting mixed up with Anupama's new family and suggests staying far from Anupama's in-laws as they are now from the daughter's side.

Barkha feels jealous of Anupama stealing her limelight and media coverage while Anupama invites Barkha to accompany her for the Kalash ritual.

Further, Anupama is instructed by the priest to imprint her hand print on the wall as a ritual while Barkha stops them as it is an expensive paint and cannot let anyone spoil the wall.

Anupama says that each of these rituals is a part of their culture and Anuj supports Anupama by saying she has imprinted his heart already.

Anupama objects to Barkha's opinion of putting the imprint on the back wall by saying they cannot let their culture get far from them through the back wall but Barkha stays adamant.

Leela explains to Barkha the importance of completing the Puja with all the important rituals.

Later, Anuj brings a chart paper to balance the new mindset and the culture which will keep the wall safe and fulfill the rituals for the Puja.

GK, Barkha, Ankush, Anupama, and Anuj imprint the wall with their hand prints and finish the Greh Parvesh Puja.

© Copyright tellybest.com, 2020, 2021. All Rights Reserved. Unauthorized use and/or duplication of any material from tellybest.com without written permission is strictly prohibited.
Cached Saved on: Sunday 2nd of October 2022 06:56:38 AMCached Disp on: Friday 7th of October 2022 09:58:02 PM