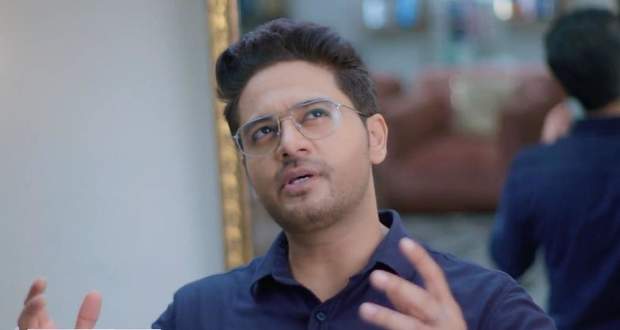 Today's Anupama 14th May 2022 episode starts with everyone encouraging Anupama to put haldi on Anuj as she has the first right to do so.

As Anupama takes on haldi to put over Anuj, music flushes in and both start performing on the tune.

Anuj runs away from Anupama to save himself from Anupama while Anupama blatantly rushes after him to put haldi on him.

Seeing this lovey-dovey behavior, Vanraj and Leela shoot glares at the couple with hate in their eyes.

Finally, Anuj kneels down in front of Anupama and accepts the haldi that she smudges on his cheeks with love.

Everyone comes and carries out the ritual of putting haldi on Anuj and showers blessings on the pair.

Next Anuj announces that it is Anupama’s turn to put on haldi on herself from his hands.

Anuj calls Anupama the Annapurna Devi of his life and this family with everyone agreeing with him.

Samar brings a separate plate of haldi which Anuj unveils revealing haldi with various other spices kept around the bowl.

Anuj puts haldi over Anupama’s face and arms after he tells everyone that yellowing their hands means to start something new.

Everyone pays their respect to Anupama for always providing them with food forever.

Anuj compliments every housewife and mother who dedicate their whole life in the kitchen for the sake of their families.

Donating every spice in Anupama’s anchal after touching them to her face, Anuj facilitates her for her unrecognized labor that she did all these years.

Leela tries to ruin the mood by commenting on something between Anupama and Anuj but fails in doing so.

The haldi ceremony continues with all other family members proceeding to put haldi on Anupama.