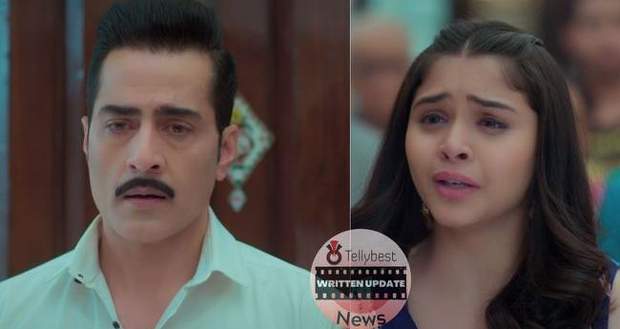 Leela asks Kanta to accompany her to the stage to speak a few lines which Kanta initially disagrees with but finally agrees.

As Kanta and Leela go up on stage, Pakhi says to herself that these two will embarrass her more in front of Barkha's friends.

Kanta then calls Pakhi to the stage to present her with a necklace which Pakhi hesitates to accept as she feels very embarrassed.

Samar announces that Vanraj and Anupama would be having the first dance-off.

Hasmukh and Leela hearing this place a bet on who will win, Anuj and Kavya also support their respective spouses.

Everybody cheers for Vanraj-Kavya and Anupama-Anuj, and Adhik says Anupama is the winner however Pakhi says Vanraj is the winner.

As the others go on stage, Barkha calls Pakhi aside seeing this Adhik and Anupama are angered and they both follow them.

Barkha presents Pakhi with jewels and asks her to sign the bill to receive it, seeing which Adhik and Pakhi get into an argument.

Meanwhile, Anupama watches from afar as Adhik tears the bill and they all leave when Anupama reads the bill which is for 60 lakhs signed by Pakhi.

As Anupama is about to confront Pakhi, Devika and Anuj try to take her away before Pakhi and Adhik are called on stage.

On stage, Adhik tells Pakhi that he doesn't want to dance, but Pakhi asks him to not create a scene.

Adhik says Pakhi is the one who creates the ruckus, and Pakhi emotionally blackmails him and sarcastically asks him to reveal the truth to the family.

Anuj feels something has happened and he asks Anupama about it who refuses to say anything.

However, Anuj drags Anupama away to a corner but Devika intervenes before Anupama can say anything.

Meanwhile, on stage Adhik pulls away from Pakhi mid-dance as he feels angry but goes away on the pretext of using the washroom which leaves everyone in splits.

Pakhi is then joined on stage by Paritosh and Samar who perform a beautiful number however Anupama is still not able to come to terms with the invoice of 60 lakhs.

After the performance, Pakhi glances around to find Adhik but is unable to.

Meanwhile, Samar announces that Kavya, Kinjal, and Devika will perform next while Barkha looks at Pakhi worriedly.

© Copyright tellybest.com, 2022, 2023. All Rights Reserved. Unauthorized use and/or duplication of any material from tellybest.com without written permission is strictly prohibited.
Cached Saved on: Monday 21st of November 2022 01:09:14 AMCached Disp on: Wednesday 7th of December 2022 03:26:00 PM