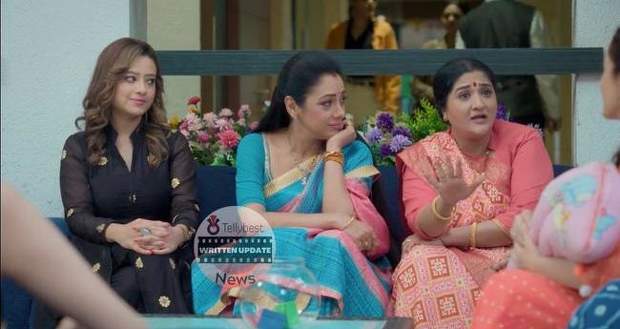 Today's Anupama 14th October 2022 episode starts with Anupama asking Leela if she is having fun.

She then asks what Barkha said to her in the room & Leela reveals how Barkha made fun of her "chameli" oil.

Anupama asks an emotional Leela to not be ashamed of her oil or not knowing English words.

She then reminds Leela of her making fun of Barkha's clothes and states if she can make fun of Barkha before, Barkha can do the same.

Afterward, all the ladies dance to "Blue Hai Pani Pani Song" and have fun, forgetting all their responsibilities and duties for once.

Leela also dances wearing her Salwar & Kameez holding an umbrella while Kinjal pretends to be drunk, swimming on the pool water's surface.

Rakhi seems to have the most fun as she smiles, laughs, & dances all at the same time.

Meanwhile, Adhik tells Pakhi he loves her while they both drink coca cola.

On the other hand, Hasmukh scolds Anuj, Vanraj, & Ankush for complimenting the food they made since it was bland and less spicy.

Ankush further states that he won't pick on food even if he goes to a restaurant.

Anuj tries to sing a Bollywood song when Ankush requests someone to sing a lullaby but Hasmukh asks Anuj to stop his "extraordinary" singing.

Vanraj then sings while everyone else joins him.

Meanwhile, Anupama goes to check on Dolly who is putting Pari & Little Anu to sleep.

At the reception, Anupama decides to call Pakhi who is waiting for Adhik to arrive and eat the pasta they ordered.

On the call, Anupama asks Pakhi when she will reach home while Pakhi makes an excuse.

Adhik asks Pakhi to be less irritated by Anupama's tone.

He lovingly feeds Pakhi when he suddenly tells her that he forgot their IDs at the reception.

Meanwhile, Anupama then calls Anuj who asks her if all the ladies have become BFFs yet or not.

Just then, a resort staff informs the receptionist about a couple forgetting their IDs when Kavya grabs the phone.

Anuj says 'I love you' while Kavya winks at Anupama and asks Anuj to call Vanraj.

He then asks Vanraj to step up his romance game while Anupama makes fun of Kavya's hesitancy to speak on call.

© Copyright tellybest.com, 2022, 2023. All Rights Reserved. Unauthorized use and/or duplication of any material from tellybest.com without written permission is strictly prohibited.
Cached Saved on: Monday 21st of November 2022 03:13:23 AMCached Disp on: Tuesday 29th of November 2022 12:39:52 AM