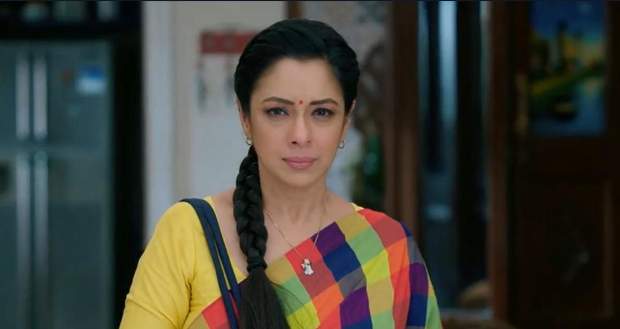 Today's Anupama 15th April 2022 episode starts with everyone congratulating Anupama on getting her paycheck through her hard work and passion.

Anupama giggles in happiness as tears flow down her cheeks due to the immense accomplishment that she has gained.

Samar tells everyone that now they do not have to worry about the budget of the marriage while Anuj decides to tell Anupama about the project later.

After seeing Anupama happy, Leela and Vanraj express their envy and remember Hasmukh’s words about Anupama being the good luck charm of the family.

Meanwhile, Rakhi eagerly waits for Kavya to reply to her as her plan is to use Kavya for taking revenge on the Shah family.

Later, Anupama cries while looking at the cheque and tells Anuj how she feels accomplished about receiving such a huge compensation.

Anupama tells Anuj about the most dreamt wish of every girl in an Indian household that she can bear the expenses of her marriage by herself.

However, only a handful of them can fulfill that as society does not allow them to stand for themselves.

Anupama reminisces how she also wanted to earn money for her marriage but never got the chance or permission.

Stressing over the behavior of the husbands when they give money to their wives, Anupama expresses her loathing towards them who pity their wives for asking for money.

However, Anupama says that God has sent Anuj in her life to let her fulfill her every wish and lead a happy life.

Anupama confidently announces that she is going to provide for the marriage expenses herself while Anuj claps for her in pride.

On the other hand, Kavya calls Anirudh and asks him to meet with her but gets shocked to see Vanraj standing there.

Anupama hands over the money to Hasmukh and asks him to spend it as he likes on the marriage.