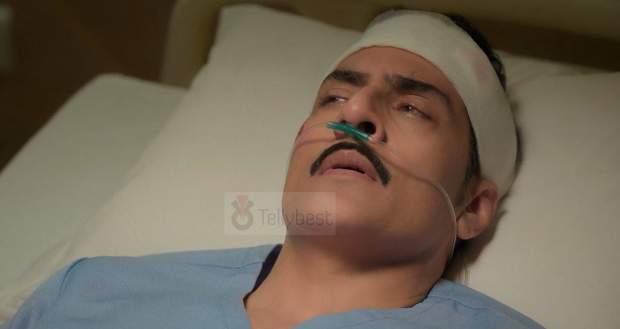 Today's Anupama 15th August 2022 episode starts with Anupama lamenting on seeing the photocards outside the ICU and begins daydreaming and talking with Anuj.

Anuj asks her to never forget the promises she has done for him and assures her that he is not going anywhere.

Anupama is consoled and begins talking to him more looking at the polaroids but as she looks back Anuj had disappeared. She motivates herself that she would never leave Anuj and make him alright again.

Pakhi and Adhik are sitting and talking when Adhik asks Pakhi if Vanraj was mad at Pakhi.

Pakhi explains that he was very hurt also because everyone came at pooja which annoyed him more.

Pakhi gets mad at Adhik for suspecting Vanraj responsible for the accident.

On this Adhik promises her they won’t fight until Anuj wakes up and tells everything himself to which Pakhi doubts if he does not wake up.

Anupama is outside the ICU door praying for Anuj when suddenly Ba arrives and begins telling her that Kavya has complained a file against him.

Leela tells her that Vanraj has lost everything ever since he left Anupama but she is scared that her son would get punished for the deed and Vanraj would go away from her.

Therefore she requests Anupama to not file against Vanraj and gives her the oath of the moments she lived in her home.

She tells her everything will get fine and further asks why exactly did they admit Anuj is such a low standard hospital.

Barkha begins doubting the doctors and divulges that she would have taken Anuj to America for surgery but Anupama tells her that even in America there are many Indian doctors only so instead of thinking about anything ulterior they should focus on praying for Anuj.

The doctor comes out of the ICU and explains that the surgery is done but if it will be successful or not would only be deciphered once the patient wakes up because there are chances that Anuj might go into a coma which leaves everyone in shock.

Choti Anu video calls Anupama to see Anuj and reminds her to give him the bracelet.

At home, GK gives Barkha and Ankush coffee when Barkha asks him to get them some food and pack some for the hospital.

She is irritated with the occurrence and divulges Ankush to take advantage of the situation.

Barkha tells him to take hold of the business, their conversation is overheard by GK.

Kavya comes to Anupama and asks her what Vanraj had confessed to her but Anupama tells her to trust her husband.

Even after this Kavya is unable to believe him completely while Anupama believes that she will confront Vanraj and get to the root cause of the accident.

© Copyright tellybest.com, 2020, 2021. All Rights Reserved. Unauthorized use and/or duplication of any material from tellybest.com without written permission is strictly prohibited.
Cached Saved on: Saturday 1st of October 2022 09:01:12 PMCached Disp on: Thursday 6th of October 2022 03:03:49 PM