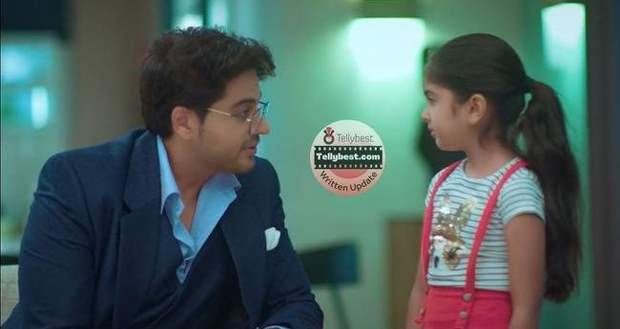 Today's Anupama 15th December 2022 episode starts with Barkha and Ankush looking after Adhik as he falls sick with a fever and telling him how Vanraj and Pakhi have turned his life upside down.

Pakhi continuously calls Adhik to talk to him but Adhik’s phone gets switched off due to low battery.

The next morning, Anupama wakes up and spots Anuj sleeping on the bed peacefully.

Recalling the events of the earlier day, Anupama plants a gentle kiss on Anuj’s forehead and notices her saree being stuck in his bracelet.

At the breakfast table, Anu gets excited to go on her Christmas trip and Anupama notices Adhik is absent and asks for him.

Adhik comes to the breakfast table and informs Anuj and Anupama how he was sick but still came down for food.

After Anu leaves to pack her things, Barkha raises the issue of Vanraj and Pakhi and asks everyone how they are going to manage things.

Adhik asks Barkha to calm down but she says that Vanraj can go to any extent just by hearing Pakhi’s dramatic words.

Once the tag of a wifebeater is stamped on Adhik, it is going to remain there for his entire life.

Barkha says when a girl accuses a man, people do not see the man’s side but continue to pressure that accusation on him.

Anuj tells Barkha that he understands what she is afraid of and says that even after he tried to talk to Pakhi, she interpreted it wrongly.

Dimple passes a paratha to Adhik when suddenly, Pakhi appears at the door surprising everyone.

Pakhi asks Adhik why he is not picking up his phone and tells him that he is very happy to talk to Dimple while smiling.

Adhik and others get ridiculed by Pakhi’s question and say that he was sick the whole time.

As Pakhi continues to blabber about his relationship with Dimple, Adhik says that they need a break from each other.

Hearing that, Pakhi gets stunned and says that Adhik wants to end their marriage which is not true.

Adhik tries to explain to Pakhi that he needs some time for himself but Pakhi leaves without hearing anything.

Anuj asks Anupama to calm down while she gets lost in her own anxious thoughts.

Later, Pakhi returns to the Shah household and tells Vanraj that Adhik wants a break from her and will end their marriage soon.

Samar asks Pakhi to stop overreacting but Pakhi says that she is sure that Adhik is going to leave her.

Kavya calls Anupama and tries to comfort her by saying that they will take care of Pakhi and ask her if problems are arising between her and Anuj because of Pakhi.

Anupama gets silent which confirms Kavya’s suspicion and she says that she relates with Anuj a lot.

Kavya tells Anupama how she and Anuj always feel a bit alienated in matters concerning her and Vanraj’s children.

Anupama thanks Kavya for saying those things to her while Vanraj asks Kavya to check on Pakhi as she has locked herself in her room.

Kavya says that she has already checked that as she is also concerned for Pakhi which makes Vanraj a bit guilty.

Pakhi cries in her room and decides to send a voice note to Adhik.