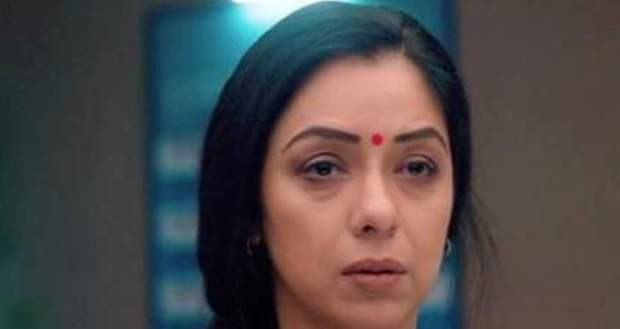 He burns his hand while Pakhi comes there and notices everything.

Kavya comes out and tells Vanraj to make coffee for her and Pakhi while Pakhi tells defends Vanraj says that he is used to working in the kitchen.

She and Vanraj start talking about the maid's food being bland while Kavya gets angry with her and says that she just wants to order food from outside.

They get into an argument.

Meanwhile, Leela helps Anupama get ready for the award function while telling her to tell Samar and Paritosh to keep in touch with Pakhi as she is worried.

Pakhi calls Kavya a homewrecker which angry Kavya and she is about to slap her but Vanraj stops her hand.

He berates both of them and says that they are proving Anupama correct.

Later, Anupama looks for Pakhi while the award in her hand while she notices her crying near a tree and asks her what happened.

Anupama asks him why Pakhi was crying while Kavya plans to go on a trip with Vanraj to cheer him up.

Anupama and Vanraj both get a message that they have to go for counselling the next day for the divorce.

Later, Anupama reaches home and gives Leela the award who puts the award on the award shelf making Anupama happy.

Pakhi reaches home and tells Vanraj that they have underestimated Anupama while Vanraj tells her to not argue with Kavya as she is under a lot of stress.

Palhi plans to go home with Vanrqj to celebrate his birthday while Kavya comes there and objects.