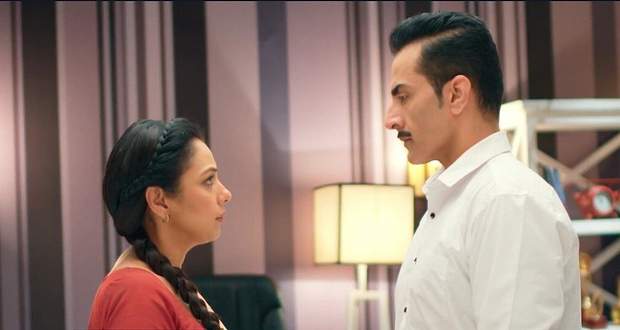 Today's Anupama 15 January 2022 episode starts with Anupama declaring that she will return to her house to Anuj, Malvika, and Jignesh.

On Anuj asking the reason, Anupama answers that she came here to treat him and now as he was perfectly fine, she should return to her own house.

Anuj and Jignesh try to convince Anupama to stay there but Anupama says that she must return as her staying there will cause rumors and talk among the people.

On the other hand, Samar and Nandini continue their argument on Vanraj and Kavya, Nandini continues to support Kavya and tells Samar how his family does not support her.

Samar gets infuriated hearing to Nandini and reminds her of Kavya's past doings and her behavior with his family and Anupama.

Nandini asks what if the same thing happens to her, Samar suggests then they should rethink their decision of marrying each other once more, both walk away from each other in anger.

At the same time, Anuj gets offended by Anupama's words explaining how she was coming in between their family, he seriously scolds Anupama and warns her to not talk about it.

Malvika jumps in suddenly lying down on the floor and asks Anupama to step on her if she wants to cross the doorway.

Somehow, Anupama manages to pull up Malvika, Malvika tells her that she needs her and convinces Anupama to stay there.

Anuj promises that he will never let Anupama leave his side and both get romantic with each other.

Later, Anuj asks Anupama about herself on seeing Malvika's case, Anupama remembers the flashback of her confronting Vanraj that same day.

She convicted Vanraj of his wrongdoings towards her and expressed the pain she suffered for 25 years.

Anuj praises Anupama for her bravery and tells her how proud he is of her, Anupama gets a call from Leela and gets shocked to hear something about Samar.

Upcoming Anupamaa episode updates: Anupama and Leela handle a broken Samar, Nandini and Vanraj have a big argument on Kavya and his relationship.