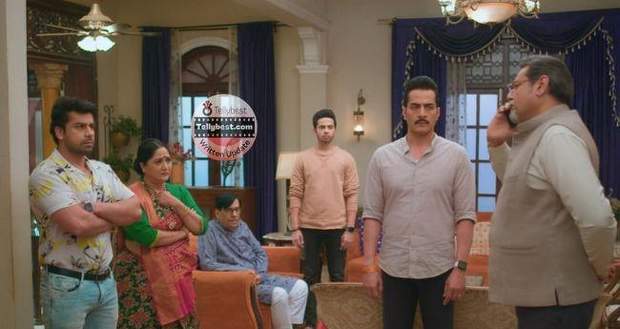 Today's Anupama 15th January 2023 episode starts with Jayanti Bhai telling Anuj that Toshu tried to commit forgery with him by taking his name and asks Anuj to take his guarantee.

Anupama also hears everything alongside Anuj and tells Jayanti Bhai that he can take necessary action toward Paritosh and that her husband will not get involved.

Toshu gets shocked to hear Anupama and asks her to just say yes to Jayanti Bhai with Leela supporting Toshu.

Anupama says that even God cannot take Toshu’s guarantee, let alone her, and hangs up the call.

Vanraj lands a tight slap on Toshu’s face and tells Jayanti Bhai that by night, he will return his money to him and even begs in front of him.

Jayanti Bhai agrees to wait till night and leaves while Vanraj grabs Toshu’s collar and asks him how much he will humiliate his father in front of others.

Leela criticizes Anupama as a mother after hearing her words on the phone while Hasmukh asks her to look after her talented grandson.

Meanwhile, Anuj asks Anupama if she wants him to help Toshu but Anupama refuses Anuj and says that Toshu should be punished if he committed something bad.

Anuj hugs Anupama to continue their conversation but Anupama suddenly finds something and starts jumping with happiness.

The mystery item turns out to be a flat stone that Anupama and Anu had been searching for for a while to play Hopscotch (stapu).

As the subject of Anu gets raised, Anupama and Anuj start missing her and wish that Anu would be there with them.

Anuj and Anupama welcome Anu with open arms and shower her with kisses as they get to know that Dheeraj and Devika brought her there.

At the same time, Ankush talks to another woman in front of Barkha and asks her why she is complaining as Barkha says something to taunt him.

Ankush says that he had told everything about his affair to Barkha a long way back but Barkha decided to stay back with him instead of filing for a divorce.

Barkha agrees that she decided to stay back as she wanted to safeguard Adhik’s life financially.

Barkha warns Ankush that if Anuj gets to know about his secret, then he will cut ties with him forever.

Back to Anuj-Anupama, Anu tells her parents how she met a friend named Maya aunty who took care of her when she had a fever.

Anuj and Anupama get worried about Anu’s health but Anu assures them that she is fine as "Maya aunty" helped her to get better.

A woman is shown who looks at Anu’s foster details and says that she will soon meet Anu and Anuj-Anupama too.

Anuj, Anupama, and Anu decide to go to the dairy farm while Dheeraj says that he needs to return to Delhi for some work.

Devika asks why Dheeraj is leaving which makes everyone curious and Anuj asks Dheeraj to drop Devika on his way.