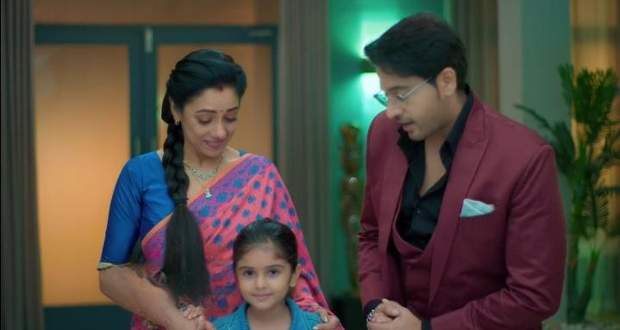 Anu cuts the cake and further dances with the family members.

Barkha questions Anupama-Anuj and asks them why they are fostering a child when Anupama already has three grown-up adults.

However, Anupama answers Barkha and says that they had a desire for a child, of someone who calls Anuj papa.

Further, Barkha and Ankush keep making up problems to argue about while Anuj ends the argument by telling them to deal with Anu's arrival.

Anuj and Anupama leave from there while Anupama scolds Anuj for bringing up the fact about keeping huge secrets.

Meanwhile, Barkha worries thinking that Anuj and Anupama have found out their reason for returning but Ankush refuses saying that if that was the case, then Anuj would have confronted them about it.

Barkha destroys the cake in anger saying that Sara and Adhik won't get anything from the Kapadia family as everything will go to Anu now.

Ankush leaves disappointed in Barkha while Adhik decides to inform Pakhi about it.

At the same time, Anuj and Anupama show Anu her room and she gets happy when they decide to go to the Shah's house and give them the news.

Meanwhile, Ankush and Barkha get into an argument over Barkha's overreaction.

Back at the Shah house, Pakhi informs the whole Shah family about Anu while the family members refuse to believe it.

Elsewhere, Anupama and Anuj are coming in the car with Anu to the Shah house while Anuj informs Anu about the Shah family members.

Anuj tells Anu about Vanraj and tells her to hug him and make friends with him immediately.

Meanwhile, Anupama sees their happiness and prays to God that it stays that way.

© Copyright tellybest.com, 2022, 2023. All Rights Reserved. Unauthorized use and/or duplication of any material from tellybest.com without written permission is strictly prohibited.
Cached Saved on: Wednesday 25th of January 2023 12:48:57 PMCached Disp on: Thursday 9th of February 2023 08:50:55 AM