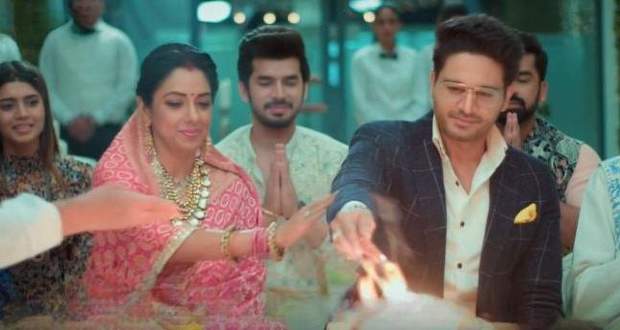 Anupama chooses both name plates for her house and presents them in front of God.

Later, the housewarming party begins while Anupama talks to Hasmukh that she is worried about how big the house is.

Hasmukh says he is happy that Anupama got equality and love in her new life.

Meanwhile, Ankush and Vanraj have a small interaction with each other.

Ankush says that he is surprised to see an ex-husband being friends with his wife and now he is friends with the Kapadias as well.

On the other hand, Leela and Vanraj observe the Shahs getting mixed up with the Kapadias while Leela says Vanraj was right about keeping the families away from each other.

Further, Hasmukh gets an acidic stomach and decides to drink some soda which makes him burp out loud.

Hasmukh's burping is looked down upon by Barkha's guest and she calls him illiterate.

Meanwhile, Vanraj arrives and replies back to the rude guest by saying that she should have some etiquette to talking to elder people.

Barkha and Vanraj start to argue while Anuj and Anupama arrive at the spot.

Ankush says Vanraj should control his tongue while Vanraj replies he will not bear any misbehavior with his Bapuji and cannot control his hands as well.

Ankush asks Vanraj if he is threatening him while Vanraj says he is a man of his words and will do what he just said.

Barkha and her guest ask Hasmukh to apologize for his burping and get rude to Anupama and Hasmukh.

Anupama stops the guest and says this same can happen with them at old age and should have some control over their words.

Further, Anupama adds that old age cannot be skipped by the power of money and she will also go through it one day.

Meanwhile, Pakhi feels embarrassed about Anupama giving lectures to everyone and making faces.

Anuj agrees with Anupama and Barkha seems to be shocked as Anupama asks Barkha's guest to apologize to Hasmukh.

Mrs. Mehta (Barkha's Guest) refrains from apologizing but Anuj continues to ask her for an apology.