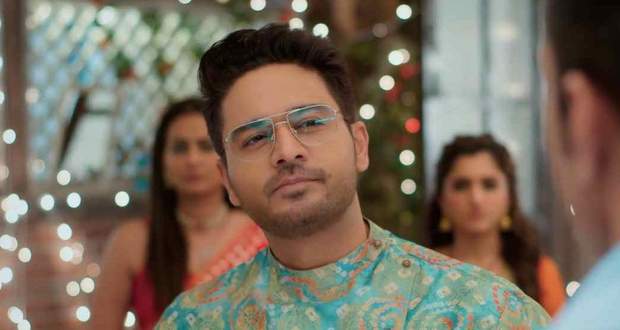 Today's Anupama 15th March 2022 episode starts with Hasmukh explaining Anupama not to overlook Anuj’s happiness for the sake of the Shah family.

Hearing Hasmukh’s suggestion of celebrating Anuj’s happiness with him, Anupama hesitates a bit but beams with joy thanking Hasmukh.

Anuj comes to meet Anupama outside on her call and expresses his happiness on gaining the new opening in his life.

Congratulating Anuj, Anupama feeds him curd sugar and shows her faith in him as he denies the charges alleged by Vanraj.

Interrupting their conversation, a kinnar stops by from whom Anuj wishes for his and Anupama’s marriage, and the happiness of Anupama’s family.

On the other hand, Malvika expresses her discontentment with Vanraj’s working manner and asks him why he decided by himself without respecting other employees.

Vanraj, in return, blames Malvika for not being there leading to him carrying all the burdens of the company.

Malvika leaves Vanraj shocked as she asks him to leave the company with her announcement of Vanika Teamworks getting dissolved.

Vanraj finds Anupama staring at her and remembers her words.

After 4 days, all gather to celebrate the Holika Dahan in front of the Shah residence.

On seeing Anuj greeting the family, Leela insults his intentions and calls him shameless.

Coming with pride, Vanraj announces that Malvika has given him a second chance hearing which Anuj reveals that it was him who convinced her.

Finding Anupama, Anuj comes into the kitchen and discovers Anupama working alone there.

He asks Anupama why she is working in the kitchen alone when all others are celebrating outside.

Remembering the past, Anupama’s heart warms up hearing Anuj’s words.