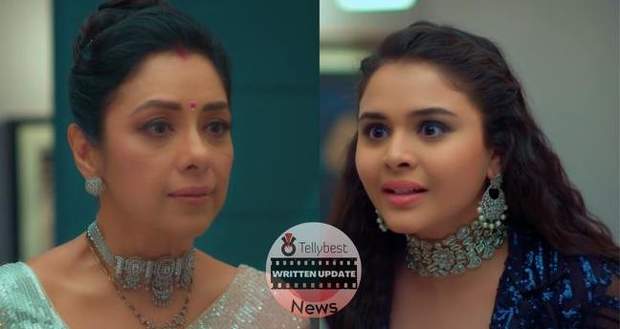 Today's Anupama 15th November 2022 episode starts with Pakhi asking Adhik why is he behaving like this and creating a ruckus in front of her family members.

Adhik then says that it is Pakhi who is creating a ruckus and insulting Adhik in front of her family members.

Pakhi asks what is this awful thing that she has done which is proving to be an embarrassment for Adhik.

Adhik asks why Pakhi signed a bill for 60 lakhs when she knows full well that they don't even have a quarter of that amount with themselves.

Meanwhile, Devika, Kavya, and Kinjal perform a sizzling dance as the others applaud them.

Next Ankush and Barkha come on stage to perform while Anupama searches for Pakhi and Adhik who are arguing.

Adhik tells Pakhi that before he saw her signing the bill for 60 lakhs he was about to tell her that his salary has been set for 1 lakh per month.

Pakhi is enraged hearing this and asks Adhik how he could possibly be happy with that amount.

Adhik says since it is his first proper job he is obviously happy.

Pakhi taunts Adhik saying that he doesn't seem to be Barkha's real brother since his dreams are so small.

Pakhi reminds Adhik that he promised to fulfill all her wishes for which 1 lakh per month isn't enough and instead he should ask Anuj for partnership.

Adhik tells Pakhi to be grateful, however, Pakhi tells him that his credibility is being Anupama and Anuj's son-in-law so he shouldn't settle for less.

As Pakhi leaves, Anupama is seen having heard the entire conversation and is shocked by Pakhi's words.

Meanwhile, Samar announces after Leela, Hasmukh, and Bhavesh's performance that now everybody should dance together.

Pakhi and Adhik hesitatingly dance with each other while Adhik goes off to dance with Vanraj while Barkha is pulled away by Pakhi.

Pakhi tells Barkha how Adhik is angry at Pakhi and has told her that he won't be able to pay, however, Barkha provokes her saying she shouldn't compromise at any cost.

Anupama sees Pakhi is missing while Pakhi and Barkha are showcasing her jewelry to Barkha's friends.

Barkha's friends tell Pakhi to be grateful to Anuj for his benevolence.

However, they taunt Pakhi saying that Adhik is just a worker in Anuj's company.

To this Pakhi says, that he will soon get a partnership from Anuj, which makes Barkha's friends snidely say that Anupama didn't even want to spend for Pakhi's wedding, partnership is out of the question.

Anupama overhears Pakhi saying that Anupama gives a lot of lectures but herself got married to Anuj and became the owner of the Kapadia Empire.

Anupama grabs Pakhi's hand as Pakhi is about to leave and drags her inside a room.

Anupama then says that Pakhi's antics will no longer be tolerated by her and says the rest of the celebrations are canceled.

© Copyright tellybest.com, 2022, 2023. All Rights Reserved. Unauthorized use and/or duplication of any material from tellybest.com without written permission is strictly prohibited.
Cached Saved on: Monday 21st of November 2022 12:43:01 AMCached Disp on: Friday 9th of December 2022 04:56:26 AM