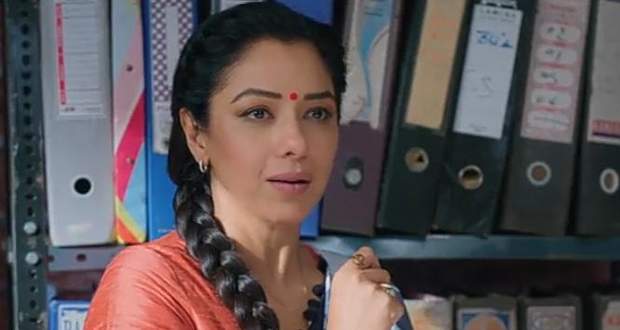 To which, she says “A lot has been going on and if Nandini and Samar were ever to ask him for help, help them regardless as a good father instead of probing any questions”.

Anuj thinks through his feelings for Anupama.

He tells himself to stop overstepping the boundaries regardless of what Devika thinks he must do about the whole situation.

Just when the cooking contest was about to begin, the weather surprisingly changes. Anupama gets worried, tries to keep herself calm.

She heavily prays to Lord “Durga” and asks the goddess to forbid the rain or whatsoever from ruining the event amid Navrathri.

Sarla blames Anupama for ruining other daughters-in-law, she warns her not to turn other women into a divorcee like her.

She yells saying none of the women in the community are supposed to fly like her and if her daughter-in-law were to win, Anupama shall make the announcement otherwise.

Baa walks in overhearing Sarla, orders Anupama to adhere to what Sarla had just said.

Vanraj surprisingly stands up for Anupama and tells everyone that Anupama or any other women shall do what they would like to do and that no one shall question them.

Hasmuk tells Baa and Vanraj to not create any drama, be it at home or at the event, and informs them of giving Anupama the permission to use the warehouse to conduct the event as the weather seemed awfully dull.

As the cooking competition kick starts successfully, Anuj thanks Anupama for making it a grand success.

Samar finds Nandini’s letter where she confirms her departure back to the U.S to ensure Samar’s safety.

Anupama is happy to see her father at the event, she is overwhelmed as all the women thank Anupama for being a great inspiration to each one of them.

She thanks them all by further motivating them.