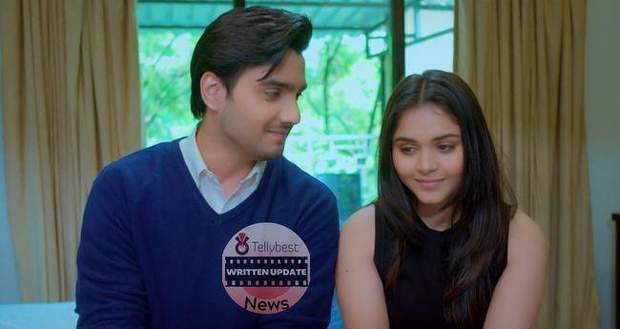 Today's Anupama 15th October 2022 episode starts with Anuj and Vanraj sitting together and having a buddy conversation where Vanraj asks Anuj for romance tips.

Vanraj says that he fails to express anything except anger, to which Anuj replies that men are always taught to express anger openly.

If a man cries or feels hurt, he is said to be weak by society which is absolutely not true.

Anuj tells Vanraj that similar to women, men also have a book of rules that they need to follow to be the “standardized men” of society.

On one hand, people applaud Bollywood heroes who romance with heroines but criticize a husband who dearly loves his wife.

Vanraj asks if he will look odd romancing Kavya even after he has turned into a grandfather to which Anuj laughs and says that he became a grandfather after only 1 year of his marriage.

Ankush spies on Anuj and Vanraj’s conversation and determines to cause a fight as he feels envious of their bond.

Meanwhile, all the ladies play truth and dare together where Barkha gets to answer and Leela gets to question.

Without thinking for a second moment, Leela asks Barkha if she loves his husband more or his surname “Kapadia”.

Everyone gets silent upon hearing the question and signals Leela as to why she asked such a thing.

However, Barkha answers that she loves Ankush’s surname more than him which shocks everyone.

At the same time, Ankush comes to Vanraj and intentionally speaks about Anuj giving Samar a loan of 10 lakhs.

Vanraj gets angry and asks Anuj and Samar why they did not inform him about the loan and money.

Samar tells Vanraj that he hid the truth because Vanraj would feel hurt because he was not able to help his son.

Thanking Vanraj for raising him, Samar says that he cannot let Vanraj pull the burden of his career and wants to grow on his own.

Anuj says that he will never try to be the father of Vanraj’s kids but he will always support them as their “buddy”.

Vanraj thanks Anuj for never boasting about his help and favors toward the Shah family to which Anuj teases Vanraj by calling him “Vee”.

In the meantime, Barkha talks about how she fell in love with Ankush and then lost everything due to his stupid decisions.

Barkha says that Ankush never allowed her to step into the business because of his male ego despite her being so educated.

As Barkha shares her struggles during married life with finances and Ankush’s incapability in managing the business, everyone including Leela feels bad.

Both Leela and Barkha apologize to each other for whatever they have said while everyone comforts Barkha.

Anupama and others suggest Barkha in finding the lost love in her and Ankush’s marriage.