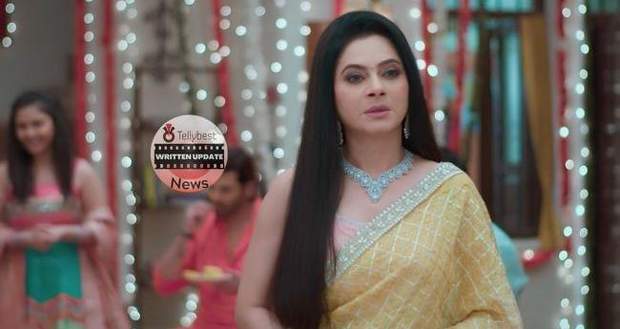 Following this Paritosh gets up and states that they haven’t kept their little girl’s pet name.

Therefore, he declares that Arya would be called Pari.

Anupama, who is watching the scene hidden behind a pillar recalls he was the one who called her Pari in the first place.

She looks at his non-shameful behavior and feels a sense of irritation from Paritosh.

Rakhi thanks god that Anupama has not done anything yet to expose Toshu.

He tells her that he will work hard to fulfill her and her baby’s luxuries and for that he might have to come late at night or have to stay out of the station for a few days.

In a cue, he adds that Kinjal has to promise him that she will not doubt her husband or get mad at him while Kinjal says she will never.

He cups Kinjal’s face with his hand and says that he can rather die than betray Kinjal.

This triggers Anupama as she yells from her corner and tells Toshu to have some shame.

Toshu looks at her in fear and anger while Rakhi immediately comes to take her away telling Anupama that she is not feeling well and she should have some rest.

Vanraj and Kinjal request Anupama to say and Anupama continues taunting Paritosh that she is disgusted by him and his behavior.

She insults Toshu and taunts him by saying she regrets giving birth to a child like this.

On being asked by Vanraj what has happened Paritosh says that it is nothing.

However, Anupama lashes out asking that leaving his pregnant wife at home and doing fun with a girl in the hotel room is nothing.

Paritosh feels his anger boiling after Anupama exposes him but does not accept his actions.

Anuj says that Anupama can’t say wrong however, Paritosh tells him to shut up only to get scolded by Anupama for insulting his husband.

Vanraj asks Paritosh why he did that but Rakhi intervenes taunting him that he followed your step.

Later, Vanraj scolds him for learning this character from his father rather than his hard work and devotion to work.

Kinjal feels her anger in her veins and asks Paritosh about the authenticity of Anupama’s blame.

Paritosh tries to deny but on giving him the swear of his baby he did not say anything confirming Kinjal.

Her heart breaks as she cries however, Paritosh stands for himself.

He states that he is not the only man who did this every man has done that and it is very common for a man.

Suddenly every one hears the sound of a tight slap that Anupama gives to Toshu.

She says that if it is legal and valid for men then so is for women.

She tells the supremacy of a wife and also that no wife deserves to be cheated on by her husband.