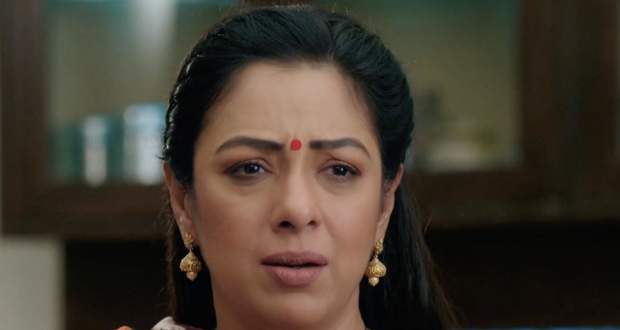 Today's Anupama 16 April 2021 episode starts with Anupama asking Samar to show the trophy to everyone.

She asks him to promise that he would always be down to earth even when he becomes successful. Then they have their happy dance.

Samar leaves to show the trophy while Anupama thinks that he is so happy that she could not tell him about her divorce.

Samar shows the trophy to Hasmukh and he congratulates him. Samar asks Hasmukh to tell him about what had happened in his absence. Hasmukh tells him about Anupama and Vanraj being stuck at the curfew.

Vanraj argues with Kavya for revealing the divorce date to his family. He warns her to stay away from him and his family until the divorce.

Leela is sad about the divorce while Hasmukh and Mamaji make fun of Leela. Then Mamaji and Hasmukh discuss divorce.

Hearing a song, Anupama and Vanraj remember one of their old memory where Anupama sings for Vanraj and becomes sad.

Kinjal makes Pakhi understand Anupama and asks her to support her. She then comforts her by wiping her tears. Pakhi tells her that she will try till the end.

Anupama makes a cake for Samar's victory. Hasmukh and Anupama spend some time together. Anupama asks him to be a bridge between Samar and Vanraj to which he agrees.

© Copyright tellybest.com, 2020, 2021. All Rights Reserved. Unauthorized use and/or duplication of any material from tellybest.com without written permission is strictly prohibited.
Cached Saved on: Tuesday 27th of July 2021 10:48:39 PMCached Disp on: Wednesday 4th of August 2021 06:11:46 AM