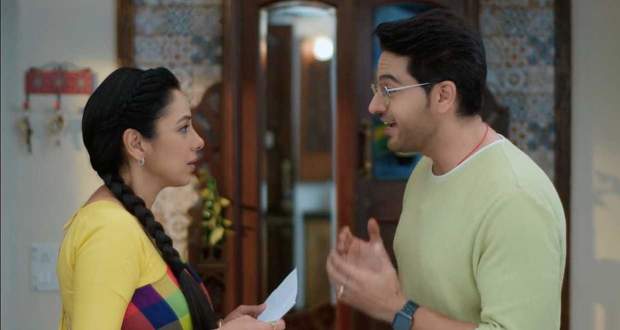 On asking, Jignesh replies that Anupama is the daughter here, and taking her money for the marriage will seem odd.

Hasmukh dismisses Jignesh’s words and tells him how the parents always discriminate against their girl child and regard their earnings as something unusable.

Empathizing with the feelings of the daughters, Hasmukh asks all present there to look upon the earnings of a girl in the same light as a boy.

Devika, Kinjal, and others compliment and show their respect to Hasmukh for changing the stereotype regarding the earnings of a daughter.

Feeling blessed, Malvika gives credit to Anuj for always keeping her in the front line along with him in their life.

Anuj tells everyone that the behavior toward daughters needs to be changed where they are not considered someone other’s property since childhood.

As the matter gets dissolved a bit, Anuj jokes how Anupama is silently listening to them talking whereas the reverse always takes place.

Anupama gets grumpy as Anuj continues to pull her leg in front of everyone.

Meanwhile, a major argument breaks out between Vanraj and Kavya as Vanraj questions Kavya why she was talking to Anirudh.

Kavya replies that she was talking about financial aid with Anirudh and announces that she has the right to make decisions for her own life.

However, Vanraj gets angry as he listens to Kavya’s constant parallel comparison between him and Anupama and asks her to shift with Anirudh after divorcing him.

As Vanraj hears about Anirudh becoming a successful person, he suggests Kavya divorce him so that her ill-luck will not affect him.

At the same time, Anuj and Anupama get a bit playful in the kitchen as Anupama gives Anuj her saree to wipe his mouth.

Anuj puts the saree on Anupama’s head like a newlywed woman and admires her blushing face.

Telling Anupama to miss him desperately, Anuj bids goodbye to her and leaves the kitchen.

Later, Anupama gets a shock while switching off the mixer and gets caught by a certain someone.