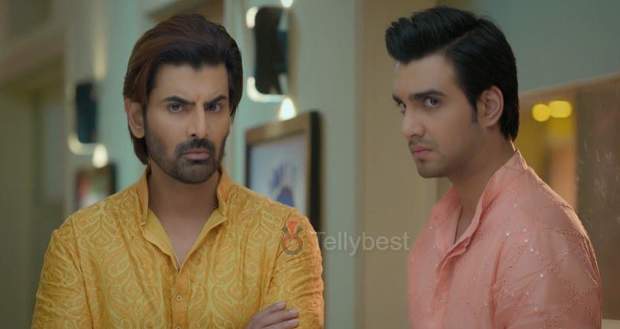 Today's Anupama 16th August 2022 episode starts with Barkha questioning why the police investigation hasn't started while the Shah's get worried hearing her.

Kavya hesitantly comes there and says that there's no need for a police investigation as she was there and told everyone what happened.

However, Barkha talks back and accuses Vanraj of attempting to kill Anuj and asks what other reason should there be for Vanraj to take Anuj to a cliff.

Leela stands up for her son and creates a scene by fighting against Barkha when Anupama comes there and scolds them.

Barkha insists that she will file a case against Vanraj at any cost and insults the Shah family while Anupama is unable to hear it and stops her.

However, Barkha doesn't stop her arguments and starts berating Anupama for supporting her so-called maternal family.

Barkha questions Anupama's character by stating that Anupama has a soft corner for Vanraj and that she is using her brother-in-law, Anuj.

Anupama doesn't keep quiet and tells of Barkha telling her that she doesn't have any right to speak between her and her husband's matters.

The argument starts once again when Leela says that why only her son is being accused while Barkha reasons that it's because Vanraj is the only one who threatened to kill Anuj.

Anupama says that she will question Vanraj and will find out the truth once Anuj wakes up.

Adhik questions what would happen if Anuj doesn't wake up and Anupama silences him with her finger telling him to not even talk about such things.

Barkha finalizes that she will get a police investigation done and will not leave anyone who tries to save Vanraj, not even Anupama.

Just then, Anupama gets a call and she rushes to Anuj's hospital where the doctor tells her to be careful and not stress him in any way.

Meanwhile, the rest of the family looks on through the window feeling glad that Anuj is regaining his consciousness.

Barkha looks at Kavya skeptically while Anupama sees Anuj's fingers twitching and begs him to wake up.

Anupama talks about silly excuses like her hair being loose and her bindi being in the right place as she requests him to wake up.

Further, Anupama plays the video of Anu reciting a poem she made for Anuj which makes Anuj open his eyes and whisper his daughter's name.

Anupama hugs Anuj's hand as he tells her that he loves her while the doctor gets happy to see him recovering very quickly.

On the other hand, Barkha says that they should tell Anupama to get the statement from Anuj of Vanraj pushing him from the cliff.