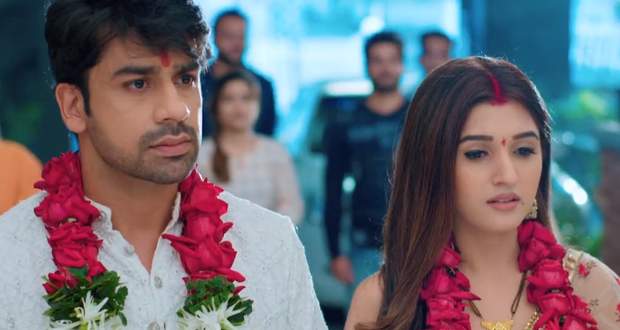 Anupama has had enough and she asks Rakhi to stop her accusations. Rakhi continues to cry while Anupama wants them to reunite and search for Kinjal and Paritosh.

Rakhi asks police to arrest Anupama while Vanraj also takes Anupama’s side. Rakhi and Baa continue to fight when Kinjal stops the arrest of Anupama.

Everyone gets shocked to see Kinjal and Paritosh married. Paritosh shows their marriage papers to the police while Rakhi says her daughter is manipulated.

Rakhi is devastated and raises her hand at Kinjal. Anupama holds Rakhi’s hand and takes her daughter-in-law’s side.

Anupama welcomes the newly-wed couple while Vanraj accuses Paritosh of not waiting. Baa thinks Rakhi will continue to create a scene if Kinjal stays there.

Paritosh is ready to leave with Kinjal and accuses Baa of taking Vanraj’s side even if he is wrong.

Anupama asks Samar and Pakhi to take Paritosh and Kinjal inside. Meanwhile, Kavya is worried for Vanraj while Anirudh mocks her.

Anupama is ready to accept Kinjal and Paritosh’s wedding and explains the importance of marriage.