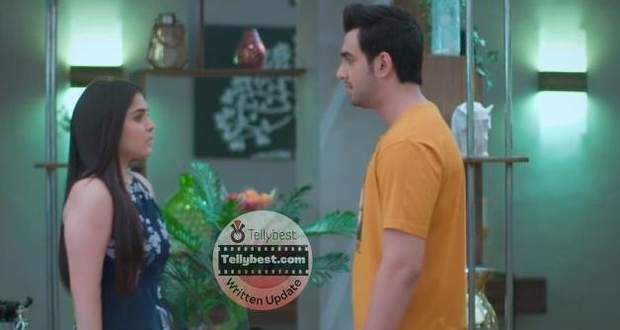 Today's Anupama 16th December 2022 episode starts with Anupama asking Adhik to take care of himself and Pakhi as she and Anu are going on their trip together.

Adhik asks Anupama to enjoy her trip full-fledged and not worry about things on this side.

Meanwhile, Leela tells Vanraj that both he and Pakhi act immaturely when they are angry and Pakhi must have done something due to which Adhik has said the “break” thing.

Anupama and Anu get ready to leave for their Christmas trip while Kinjal also arrives there with Pari.

However, Kinjal notices tension between Anuj and Anupama and gives them a moment in private after taking Anu outside with her.

Anupama and Anuj take steps toward each other and bid goodbye to each other with small gestures.

Anuj says that both he and Anupama are in turmoil due to their thoughts but they should get through it easily.

Anupama hugs Anuj tightly on hearing those words as she gets relieved that nothing is getting disrupted between her and Anuj.

Before leaving, Anuj takes away Anupama’s phone from her and asks her to leave her mother, daughter-in-law, and wife roles behind.

After Anupama leaves, Anuj forgets that Anupama has left and calls for her to make him a green tea.

Dimple starts to laugh at seeing Anuj and reminds him that Anupama is not at home.

Anuj tells Dimple that he does not have the habit to stay away from Anupama and it is his first time without her.

Meanwhile, Vanraj hesitates to disturb Pakhi who has locked herself in her room while Leela suggests he should leave Pakhi alone.

Adhik gets a voice message from Pakhi in which Pakhi says that she will not force Adhik to be with her if he does not want to.

Pakhi says that she loves Adhik profoundly and cannot bear to live without him, and that’s why she is going to die.

Adhik goes crazy after hearing the voice note and starts to run to Pakhi but Barkha and Ankush stop him and decide to go with him as Anuj is busy with a meeting.

On the other hand, Adhik, Barkha, and Ankush arrive at the Shah household and ask where Pakhi is.

Adhik starts to bang on Pakhi’s door after he hears that she has locked herself in her room while Barkha makes everyone hear the voice note.

Anupama, Anu, and Kinjal continue to have fun at the camp by playing games and dancing together with Kinjal and Anupama appearing as jokers.

Adhik, Vanraj, and all others continue to call Pakhi from outside but no reply comes from inside the room.

© Copyright tellybest.com, 2022, 2023. All Rights Reserved. Unauthorized use and/or duplication of any material from tellybest.com without written permission is strictly prohibited.
Cached Saved on: Wednesday 25th of January 2023 05:27:47 PMCached Disp on: Wednesday 1st of February 2023 06:00:40 PM