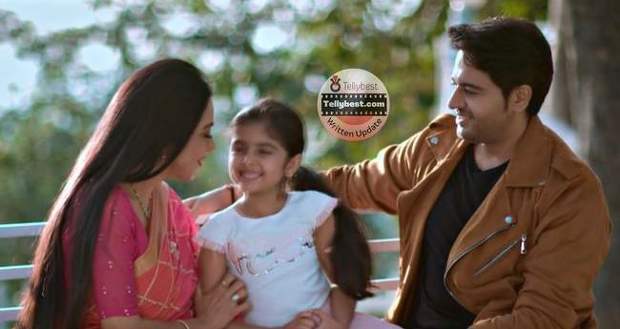 Today's Anupama 16th January 2023 episode starts with Dheeraj and Devika bidding their goodbyes to Anuj, Anupama, and Anu and promising to visit them on Makar Sankranti again.

Anuj and Anupama adore Dheeraj and Devika’s chemistry as they watch the two bickering with each other as they leave.

Holding the hands of their daughter, Anupama and Anu start their journey to their new destination, which is the dairy farm of Go Cheese.

Meanwhile, Vanraj constantly tries to call Kavya and gets frustrated when she does not pick up the phone.

Vanraj says that he needs the money in the locker urgently while Kavya does not even bother to take the matter seriously.

Kavya arrives home at that instant and says that she is done with this family’s constant drama which is why she was not picking up the calls.

Kavya asks Vanraj why he was constantly calling her in the middle of her shoot and complains that she has a professional life now.

Vanraj says that clicking pictures wearing half-naked clothes is not considered a profession, leaving Kavya in shock as to how her husband thinks.

Kavya tells Vanraj that his thinking is really small-minded while Leela also supports Vanraj in his statement.

Vanraj asks Kavya why she was silent when that photographer was insulting him to which Kavya replies that Vanraj was the one who insulted Mohit.

Kavya is left astonished on seeing Vanraj saying that she was enjoying it while that photographer was touching her openly in the video call.

Kavya says that Vanraj needs to respect other people and their profession as it is not a stereotypical society anymore.

However, Vanraj changes the topic and asks Kavya to give the locker keys but Kavya refuses to do so.

Kavya asks Vanraj why she would give her lifelong savings to save Toshu when he has committed the misdeed himself.

Leela asks Kavya if she is okay with Toshu going to jail to which Kavya replies that Toshu will go to jail because of his own fault.

At the same time, Anuj, Anupama, and Anu take a tour inside the factory of Go Cheese and observe the manufacturing process of cheese from milk.

Anu enjoys her time there tasting various kinds of cheese, making Anuj and Anupama happy with their decision to visit.

Kinjal comes home and agrees to help Toshu despite not being willing to do so as she does not want Leela and Hasmukh to give away their jewelry and savings.

Kinjal says that she will give the money she has saved for Pari’s future while Toshu gets nervous as he has already taken that money without telling anyone.

After returning from her room, Kinjal says that she cannot find the money anymore and asks Toshu if he is the one who took it.

Toshu says that he just took that money as a loan and planned to give it back but Vanraj does not hear his excuses anymore.

Vanraj advances toward Toshu and lands thrashes after thrashes on his face while cursing him to be the most shameless son in the world.

However, Hasmukh falls to the floor while trying to stop Vanraj, stopping Vanraj from beating up Toshu.

On the other hand, Anuj, Anupama, and Anu enter the milk farm and enjoy their time with the cows and tasting quality milk manufactured there.

© Copyright tellybest.com, 2022, 2023. All Rights Reserved. Unauthorized use and/or duplication of any material from tellybest.com without written permission is strictly prohibited.
Cached Saved on: Wednesday 25th of January 2023 10:00:28 AMCached Disp on: Wednesday 1st of February 2023 06:27:34 PM