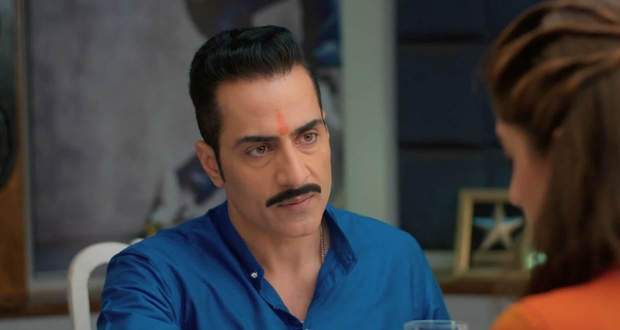 Today's Anupama 16th March 2022 episode starts with Anuj objecting to Anupama working alone in the kitchen while others are enjoying the festival of Holika Dahan outside.

He tells Anupama that she has come to take care of Kinjal, not work as a maid in the kitchen by herself.

Seeing Anuj angry about the matter, Anupama feels joyous and smiles while her heart tingles.

Anuj enters the festival area with his hand intertwined with Anupama and tells Leela not to make Anupama do the household work.

Leela objects to Anuj’s whims and tells Anupama only can do the household work in that house but gets snubbed by Anuj’s savage reply.

Starting the puja, all the couples take turns in doing the ritual, Anupama asks Anuj to join her in the ritual as they are a couple.

Anuj and Anupama happily perform the ritual while Leela wishes Anupama to stay in the Shah house with Anuj disappearing from her life.

Suddenly, a burning log falls in between Anuj and Anupama making everyone anxious about the well-being of both.

After the puja gets over, a dance starts between the family members when Anuj and Vanraj come out suddenly and stand against each other.

Samar and Toshu back up Anuj and Vanraj respectively and add up to the tension between the two enemies.

Anuj and Vanraj sit down for an arm-wrestling challenge in which Anuj defeats Vanraj with Anupama cheering for him.

On the way back home, Anuj asks Anupama if she can come back home now but Anupama declines his request saying Kinjal still needs her.

Anuj understands and tells Anupama about their first Holi the next day and expresses his wish to throw colors on Anupama the first.

Anupama agrees and blushes in excitement while Anuj declares the color of their Holi as “The color of love”.

However, Vanraj eavesdrops on their whole conversation and smirks to himself thinking of something evil.

To get to know more, download Anupama all episodes or watch online today's (16 March 2022) latest full episode, go to hotstar.com