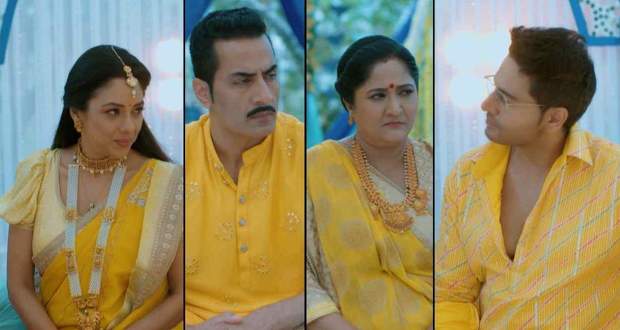 Today's Anupama 16th May 2022 episode starts with Jignesh asking about the 7th day and Anuj replies saying it's a weekly day out.

Kinjal asks Paritosh to be like Anuj while Paritosh taunts Anuj's goodness is ruining their life and makes the Shah laugh.

Anupama again thanks Anuj for respecting her as a woman and she is privileged to have Anuj in her life.

Shahs start the Haldi ritual with Anupama and Anuj whereas Leela and Vanraj sit in jealousy in the corner.

Anuj had invited transgenders to bless them before the big day. They come there at the moment and bless them for the wedding and remind them that once they had blessed Anuj and Anupama to get married to each other.

Anupama presents them with sweets. Kanta gives inspiration to Leela, saying if Anuj and Anupama can get married then Leela can also keep a relationship for 27 years.

Further, the bride and groom thanked the Shahs for standing through everything with them.

Malvika and Devika give the bridal attires to both Anuj and Anupama at the same time.

Anuj asks Paritosh, Kinjal, Samar, and Pakhi to be his best friends after marriage as well.

Later, Anuj and Anupama get ready for the big day. Anupama blushes thinking about the big day.

Leela wants to get over this wedding drama and accidentally applies haldi to Anupama.

She thinks that Leela is giving her a blessing and invites her to the wedding.

Kinjal and Pakhi decide to get Anupama ready and at the same time, Kinjal's baby kicks her.

On the other hand, Vanraj asks Kavya why she is so happy about the wedding. Kavya replies saying Anupama has forgiven them for the deeds they did and she even asks Vanraj to give farewell to Anupama.

Later, Kinjal asks Anupama to meet her so that her baby should also become like Anupama.