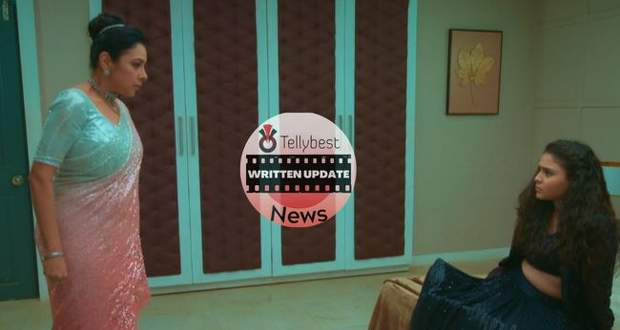 Inside the room, Anupama is about to open the room, when Pakhi holds her pallu.

Pakhi then begs in front of Anupama to not reveal anything to the family.

Anupama sees Pakhi and starts crying herself but reminds herself to be strong with a poem and leaves Pakhi and opens the door.

Anupama sees everyone dancing and walks towards them with clear intent.

Pakhi who is following her, pleads with her to not ruin the happiness of the family.

As soon as Vanraj asks what the issue is Anuj understands and asks the guests to leave.

Vanraj asks Anupama to clearly state what the issue is and why is she canceling the events.

Anupama says she doesn't know where to begin and says that Pakhi was thrown out by Vanraj but Anuj took her responsibility.

Anupama then says that to give Pakhi and Adhik's relationship legitimacy he even arranged for her wedding with all the elders in attendance.

Even after all this Anupama says that Pakhi is far from being grateful.

She then says that Pakhi is only fueled by 3 things - Greed, Insolence and being obstinate.

Anupama then says that Pakhi is obstinate about wanting a bigger wedding venue, getting expensive jewelry, and wearing designer clothes.

She continues saying that when these foolish demands aren't met Pakhi becomes insolent.

Anupama then says that Pakhi was embarrassed to get married from her own home, and in just one moment refused to associate with her Nani and Mama.

And finally Pakhi without asking anybody ordered expensive jewelry.

Anupama then shows the invoice for the 60 lakhs worth of jewelry bought by Pakhi.

She then apologizes to Anuj as Pakhi took advantage of his generosity.

Anupama then says that she will never let any of Pakhi's needs go unmet but won't accept her greed.

Further, she then says that because parents love their children unconditionally, that's why children don't respect them.

She continues saying says that she filled all three of her children with good behavior and morals but that is all a mother can do.

She then says Pakhi thought her to be a servant, who is useless and an embarrassment.

Anupama then apologizes to Adhik because Pakhi thought him to be worthless and thanks him for changing for the better.

Anupama then tells Anuj that Pakhi's mindset is such that she said her own mother is a gold-digger and so she will do the same to get rich.

Further, Anupama says that Pakhi invested in an unprofitable deal by trading precious relationships for 60 lakhs of jewelry.

© Copyright tellybest.com, 2022, 2023. All Rights Reserved. Unauthorized use and/or duplication of any material from tellybest.com without written permission is strictly prohibited.
Cached Saved on: Monday 21st of November 2022 01:21:06 AMCached Disp on: Tuesday 29th of November 2022 10:57:35 AM