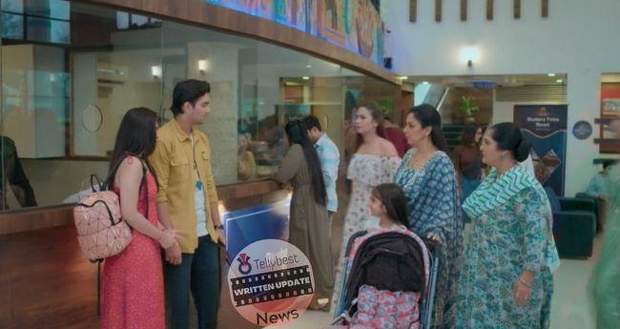 Today's Anupama 16th October 2022 episode starts with the ladies continuing the game of truth and dare and Leela choosing dare from Rakhi.

Rakhi asks Leela to dance to an item song to which Leela refuses to dance but later gives up after everyone taunts her.

Climbing on the bed, Leela shows her explicit moves in the song “Dholira” with others also joining her.

Leela says that she never succeeded in expressing herself so independently due to the presence of the entire family and relatives.

Everyone agrees and realizes the perks of coming to a women’s day out together.

The game continues with the ladies spinning the bottle and having fun dancing and singing and having conversations.

Vanraj says that the tears just came without him thinking about anything.

After being asked to share his feelings, Vanraj reveals that he remembered that he has to return to his bland and monotonous life as soon as the day gets over.

A life where duties and responsibilities bind him while his wife and children work hard to earn money.

Trying to cheer up Vanraj, GK says that Vanraj can build a career in singing as he has a nice voice and talent in that field.

Anuj also supports GK’s point and says that people can become pretty famous nowadays on social media through these talents.

To compensate for the sentimental mood, Anuj asks Vanraj to dance to a song to which all the men go crazy and dance with free minds.

Back at the resort, Barkha asks Anupama why she married Anuj to which Anupama answers that she was blessed to find Anuj in her life.

Anupama rewinds her life’s story and tells everyone how she ended her marriage and got to experience love all over once again.

On being asked if she has any unfulfilled wish, Anupama replies that she could not finish her studies and it still stands as regret in her life.

Rakhi lifts the mood and suggests everyone go to the sunset point to watch the sunset together.

Pakhi and Adhik come out of their room and go to the reception with Anupama and the others leaving shortly after them.

While Pakhi and Adhik check out, Anupama bumps into them while trying to stop Anu from running around and is left stunned.

Others also come there and stand shocked after seeing Pakhi and Adhik together and the receptionist handing them their room bill.

© Copyright tellybest.com, 2022, 2023. All Rights Reserved. Unauthorized use and/or duplication of any material from tellybest.com without written permission is strictly prohibited.
Cached Saved on: Monday 21st of November 2022 09:05:04 AMCached Disp on: Thursday 1st of December 2022 01:51:35 AM