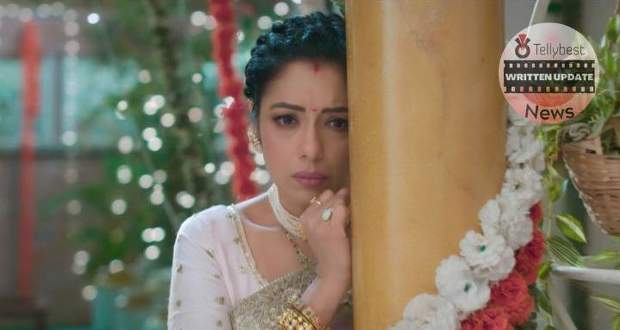 Today's Anupama 16th September 2022 episode starts with Anupama asking Paritosh if the other girl knows that Paritosh is married.

He takes her hand and begins manipulating her to not listen to Anupama since she is of old thought and he and Kinjal know better about their love and each other.

Kinjal sarcastically tells him that she will forgive and forget everything he did but on one condition which is she will also do something to fulfill her needs randomly.

Paritosh does not like the idea of it and raises his voice against Kinjal.

Vanraj yells at him to lower his voice but as Toshu does the same for the second time Vanraj takes him by his collar and slaps him tightly.

Toshu tells him to understand that women overreact but men have their needs.

On this, Vanraj again slaps him and says that he still is guilty of what he did to Anupama however, even though both he and Anupama were not happy in that marriage they continued it for 17 years.

Following this Kavya scolds Rakhi for behaving like a typical woman and hiding Paritosh’s truth.

However, Rakhi retorts since Kavya isn’t a mother so she won’t understand but Kavya says she is still a woman.

Rakhi taunts if that is why she was ruining another woman’s family.

Anupama makes them quiet when Leela asks Anupama why she had to tell when Toshu promised he won’t do it.

Anupama tells that the sooner a wife gets to know about her husband’s truth easier it gets.

She further asks Kinjal to decide anything because she is the wife.

Rakhi gets tensed about the decision and says that Toshu has promised to not do it again.

However, Anupama says that Toshu is her child, she knows that all Toshu has ever done are constant mistakes.

She adds that there is no guilt in him about the fault therefore there is also no guarantee about his loyalty anymore.

Suddenly Arya begins crying and Kinjal and Toshu move to go to her.

However, Kinjal stops Toshu from going to her baby and Toshu gets surprised.

Rakhi tells Kinjal to take any decision while thinking about the baby she has but Anupama says that since the wife is being cheated on so a wife will take the decision not a mother.