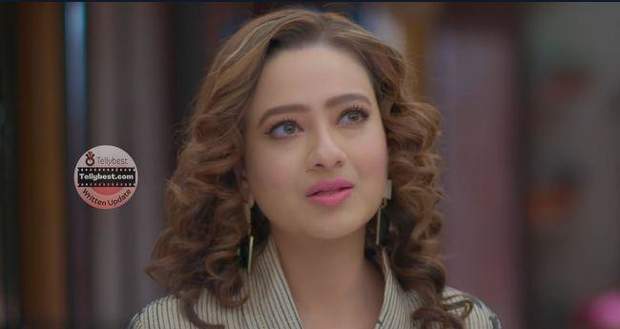 Today's Anupama 17th December 2022 episode starts with Pakhi opening the door with headphones around her ears and shocking the family members.

Adhik breaks down in anger and asks Pakhi why she did such a thing that almost made him crazy in panic.

As Adhik leaves, Barkha and Ankush also criticize Pakhi’s foolishness and ask Vanraj to talk to her.

Meanwhile, Anupama feels restless for some reason and tries to think positively about everything going on.

Vanraj asks Pakhi to come downstairs as they need to talk with her.

Adhik relaxes a bit after sitting on the sofa while Barkha and Leela rub away his sweat and try to calm him down.

Pakhi comes downstairs while everyone stares at her with disappointed faces and asks what the matter is.

Vanraj asks Pakhi why she sent a voice note to Adhik, saying that she will kill herself if they cannot live together.

Barkha and Ankush add to that by mentioning the part where Pakhi said that Adhik will be responsible for her suicide.

Pakhi gets surprised on hearing everyone talking about that message and asks Adhik why he made everyone hear the message.

Adhik along with the others gets shocked to hear such a thing from Pakhi and asks what she means by that statement.

Pakhi says that it is a matter between her and Adhik and the family does not need to interfere between them.

Ankush voices the panic that both families had after hearing such a voice note while Adhik stares at Vanraj and sees his head low in shame.

Pakhi tells everyone that she had no choice but to call Adhik in that way as he was not replying to her calls and messages.

Vanraj asks Pakhi to shut up and tells her how big of a mistake she has committed as giving one’s life is not a play.

In the meantime, Anuj and Dimple see the pictures sent by Kinjal from the camp and laugh after seeing everyone’s smiles.

Anuj asks about Barkha, Adhik, and Ankush and gets worried after Dimple tells him that they went out in a panicked state.

Coming back to the Shahs, Barkha talks about how Pakhi might take some foolish step in the future for which Adhik will be blamed.

Barkha talks about the laws that protect women and asks Pakhi to never misuse those.

Pakhi asks them to shut up but Vanraj and Adhik command her to stop talking after what she has done.

Pakhi brings up how Adhik used to say similar things like his heart being restless when Pakhi refused to meet him.

Adhik states that those things and the thing she said are completely different while Pakhi says that he emotionally blackmailed her for their first kiss too.

Adhik makes it clear that he never forced Pakhi to do anything and even went up against his family for her.

Hasmukh stops Adhik-Pakhi’s argument with a loud scream and asks them to stop fighting like that in front of the families.

As Vanraj begins to dial Anupama’s number, Anuj enters and says that Anupama will not come there.

Meanwhile, Anupama asks the driver to take Kinjal, Pari, and Anu home comfortably and leaves in a taxi.

Anuj says that he is there as Adhik’s uncle and not Pakhi’s buddy as he is done with trying to manage both sides.

Anuj declares that from that moment, he is drawing a clear line between himself and the Shahs and will side with his real family.

Vanraj and others get shocked to hear Anuj saying that from now on, he will start to impose on what belongs to them or him, rather than “we”.

© Copyright tellybest.com, 2022, 2023. All Rights Reserved. Unauthorized use and/or duplication of any material from tellybest.com without written permission is strictly prohibited.
Cached Saved on: Wednesday 25th of January 2023 03:27:01 PMCached Disp on: Monday 6th of February 2023 05:52:10 AM