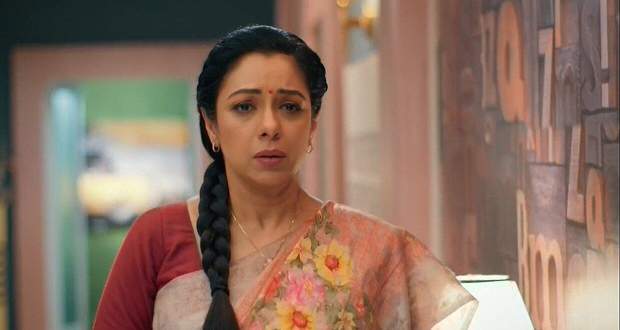 Anupama and Leela reach the dance studio and get shocked to see Samar in such a state, Anupama tries to stop Samar but he continues dancing.

Finally, he stops as he falls, Anupama embraces his son in her arms and tries to comfort him.

Samar tells Anupama that Nandini has changed and doesn't understand him now whereas Anupama tells him to think from Nandini's perspective.

But Samar refuses to see anything and jumps to the conclusion that they should break off their relationship before marriage to prevent it from breaking off with a divorce later like his parents.

Anupama gets upset hearing Samar's words, Leela convinces Anupama to leave him for now, Anupama thinks about the state of Nandini.

Meanwhile, Nandini cries alone and emphasizes the fact of how Samar is refusing to understand her, she expresses her wish to support her aunt in these difficult times.

Nandini sheds tears reminiscing how the Samar who stood up for her against his family once, is now fighting with her for his family.

After some time, Anupama returns to Anuj's house and both share the situation over a cup of tea.

Anupama tells Anuj how Samar is scared of marriage after he has seen the divorce of his parents, she explains that Samar needs to change his thinking for things to get right.

Anuj listens to Anupama and supports her emotionally while saying some intimating words to her.

The next day, Samar passes by Vanraj while entering the house, suddenly Nandini appears and asks about Kavya's whereabouts from Vanraj.

Nandini implies the fact that no one here cares about Kavya or regards her as their family.

Vanraj replies that it is because Kavya has done so many mistakes in the past to which Nandini replies that he has also done the same mistakes so he shouldn't judge others.

Vanraj shouts in anger at Nandini for her words.

Upcoming Anupamaa episode updates: Samar breaks of his and Nandini's engagement ring, Vanraj tells her that Samar and his blood are the same.

Anupama confronts Vanraj about him instigating the breaking of Samar and Nandini's relationship.

© Copyright tellybest.com, 2020, 2021. All Rights Reserved. Unauthorized use and/or duplication of any material from tellybest.com without written permission is strictly prohibited.
Cached Saved on: Wednesday 19th of January 2022 01:22:31 PM