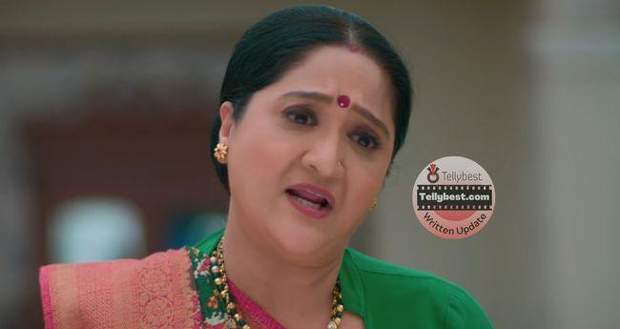 Today's Anupama 17th January 2023 episode starts with Vanraj telling Kinjal that he was very wrong to ask her to forgive Toshu for his mistakes in the past.

Vanraj says that he has realized how much of a disappointment his son is and asks Kinjal to never forgive Toshu as he does not deserve that.

With his head sinking down, Vanraj says he has to sell away Leela’s jewelry and Hasmukh’s lifelong savings due to Toshu.

Vanraj assures Leela that he will bring back her jewelry anyhow while Leela tells Vanraj that she has no regret in giving away her things for the family.

Leela asks Vanraj to cheer up as her jewelry is being used to save their family from a crisis.

Vanraj leaves with the things to hand them over to Jayanti Bhai along with Toshu while a gloomy atmosphere surrounds the Shah family.

Meanwhile, Anu tells Anuj and Anupama that she enjoyed their short trip together and got to learn so many things.

Anuj says that that trip is one of the best trips in his life as he had both Anupama and Anu to accompany him.

Anupama says that happiness is like a spectacle one forgets on their head as it is there with us always but we tend to search for it everywhere in the world.

Anuj agrees with Anupama and says that one does not need to plan a lavish trip to enjoy themselves, they can do so quickly while remaining in their local surroundings.

Anupama adds to Anuj’s statement and says that a person should at least give one hour to themselves and their family and get invested in some hobby that makes them happy.

At the same time, Pakhi tells Leela and Hasmukh that Adhik is trying to look for a solution by talking to a lawyer so that they do not feel so low.

Hasmukh tells Pakhi that her brother, Samar, needs her the most in the present situation as he points at Samar standing in a corner with a gloomy face.

As Pakhi tries to comfort Samar, he says that he feels ashamed of himself as he cannot even help his own family after working so hard day and night.

Pakhi explains to Samar that money is not everything in one’s life and he does not cause trouble, unlike her and Toshu.

Vanraj and Toshu return after handing over the money and jewelry to Jayanti Bhai and get silent.

Vanraj says that he is ashamed of himself as he does not earn a rupee while the women of the family are trying their best to run the house.

Vanraj admits that their house was perfect as long as Anupama was there and has gone haywire after she left.

In the meantime, Anuj and Anupama discover a card given by Maaya with “We will be together forever” written on it.

Kinjal calls Anupama but could not bring herself to tell anything to her and hangs up.

After returning home and meeting Dimple, Anu asks Anuj to give her his phone as she wants to call Maaya.

Anupama and Anuj feel suspicious about this woman and Anuj asks Anupama to talk to Maaya on the phone.

However, as soon as Anupama speaks hello to Maaya, the call gets disconnected.

© Copyright tellybest.com, 2022, 2023. All Rights Reserved. Unauthorized use and/or duplication of any material from tellybest.com without written permission is strictly prohibited.
Cached Saved on: Wednesday 25th of January 2023 12:14:19 PMCached Disp on: Wednesday 1st of February 2023 07:09:54 PM