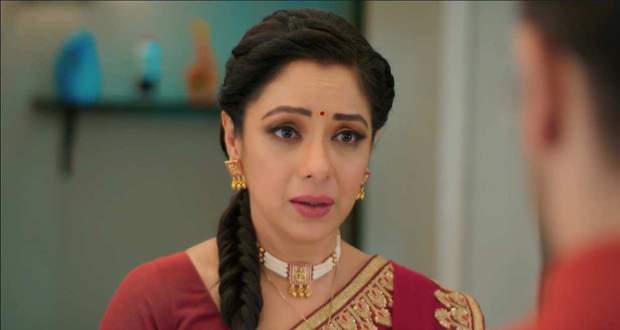 Today's Anupama 17th March 2022 episode starts with Anuj and Anupama preparing for Holi the next day with excitement in their hearts.

Suddenly, Vanraj appears in Anuj’s house and announces that he will not let Anupama go back to Anuj at any cost.

However, the scene turns out to be Anuj’s dream which makes him anxious about the next day’s occasion.

The next day arrives, Hasmukh wishes Leela “ A happy Holi” by putting color on her face and then to the other family members.

Kavya enters their bedroom with food for Vanraj as he does not like to play Holi.

After wishing him a happy Holi, Kavya makes Vanraj put color on her face while Vanraj, too makes Kavya apply color on his cheek.

Vanraj sings Kavya a love song as she was about to leave and both share a loving hug.

Samar comes to call Anupama and finds her dressed beautifully for Holi.

Guessing the cause right, Samar teases his mother while Anupama blushes with embarrassment.

She tells Samar that Anuj will be the first to put color on her to which Samar suggests Anupama lock the door and stay inside.

Vanraj comes outside Anupama’s room and knocks on the door so that she will open the door.

Thinking it is Anuj, Anupama was about to open the door, when she realizes that it is Vanraj by his scent.

Failing Vanraj’s plan, Anupama refuses to open the door for him and waits for Anuj to arrive.

Meanwhile, Toshu gives water to Kinjal on seeing her coughing and apologizes for his harsh words.

Anuj cleverly covers himself fully and rushes to Anupama’s house to play Holi with her.