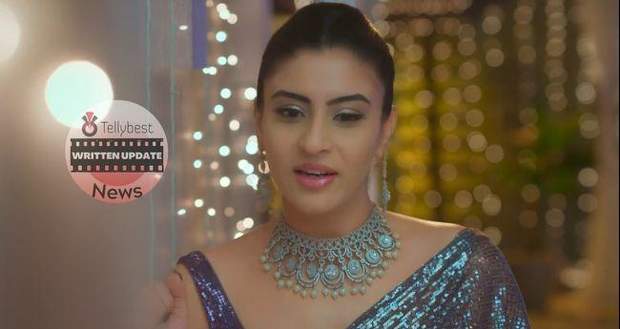 Today's Anupama 17th November 2022 episode starts with Anupama asking Pakhi rhetorically if she has forgotten the hopeless, thrifty, slogging in the kitchen that she did for 26 years.

She then asks Pakhi why she doesn't think once before insulting her mother but thinks a hundred times before posting on social media.

Anuj says that even if God came down and told him that Anupama married him for money he wouldn't believe it as Anupama loved him before he got rich.

Pakhi then screams at everyone to stop taunting her, however, Vanraj tells her to have the heart to listen when she can say such disgusting things.

Before Pakhi can say anything else, Vanraj yells at Pakhi to shut up.

Right then Anupama says that she has cried enough and now she will take a decision that might be difficult but important.

Then she turns to Adhik and says that for no fault of his own he has to be punished along with Pakhi as he has married Pakhi.

Anupama then announces to Adhik and Pakhi to get out of Anupama Kapadia's house immediately.

Anuj says to Anupama that this is not punishment but rather a chance for improvement.

Anupama then tells Pakhi to get out, to which Pakhi responds desperately asking where would they go.

Leela tells Pakhi to not even think about coming back to the Shah House as married girls stay with their in-laws.

Anupama then tells her to pack some food of the fancy caterers and take it with her.

Pakhi then tells Anupama to not do this to her as she is her daughter.

She then starts shouting and says that she will beg and plead in front of Anupama however she won't leave.

Vanraj tells Anupama to not throw her out, however, she reminds him that he did it too, and threw her stuff out.

Anupama then tells Vanraj that if he has such a problem then he should take Pakhi and Adhik but she knows he won't do it.

She then asks everyone if anyone is ready to take Pakhi's responsibility but nobody accepts.

Anupama then asks Pakhi to care about her husband at least, as she doesn't care about anybody else.

Pakhi pleads with Vanraj to take her in however Adhik says that he won't live in Pakhi's maternal house.

Pakhi then throws things in a fit and says she won't leave.

Anupama seeing this blesses Pakhi to prosper and have a chance to grow and develop.

Adhik then brings Pakhi's luggage out and Anupama puts Tika on Pakhi-Adhik before they leave, after which Anupama breaks down and finally absorbs today's events.

© Copyright tellybest.com, 2022, 2023. All Rights Reserved. Unauthorized use and/or duplication of any material from tellybest.com without written permission is strictly prohibited.
Cached Saved on: Monday 21st of November 2022 08:50:29 AMCached Disp on: Thursday 1st of December 2022 11:32:33 AM