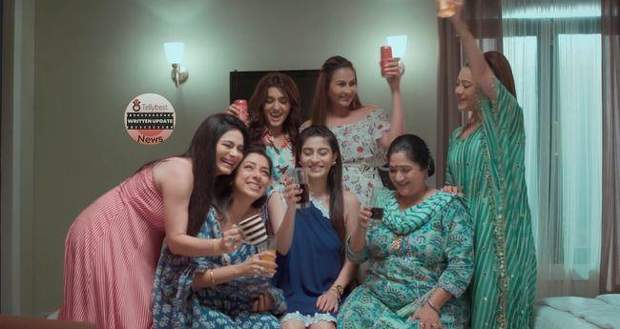 Anupama keeps on recalling Pakhi's lies about a school project and she asks both Adhik & Pakhi to follow her.

Adhik tries to defend Pakhi but Anupama shuts him up, stating she just wants to talk to her daughter.

Barkha loses it & asks Leela to calm down and states that Pakhi came with Adhik herself.

Rakhi agrees with Barkha, saying Pakhi is not a milk-drinking baby that Adhik can just bring anywhere.

Leela & Barkha get into an argument while Pakhi shouts at them to stop it.

She then tells Anupama she did not do anything wrong as youngsters her age do far worse things than her & Adhik.

Anupama then asks Pakhi whether she even understands the meaning of "adults".

Anupama then asks Pakhi to live like those kids who start living separately at sixteen, apply for a loan for their higher education, manage their own expenses, etc.

Pakhi glares at Anupama and states that they have made her living situation hell while Anupama challenges her to live alone & manage her expenses.

However, Pakhi says children her age have to lie since parents overreact to everything.

She then holds Adhik's hand in front of everyone, saying she loves him.

Adhik supports her and lets Anupama know that he and Pakhi wish to marry each other.

At Shah house, GK & Hasmukh joke with each other while Anupama decides to go back home along with Pakhi.

Kavya then asks Anupama not to do anything since Ankush & Vanraj are still together and might do something in anger.

Anupama then stops Leela to call Vanraj while Barkha angrily takes Adhik in a separate car.

Back at Shah house, Vanraj asks Samar why Pakhi hasn't returned home while Pakhi tries to placate an angry Anupama.

Anupama then asks Pakhi to think twice before making such decisions, as someone known to her or Adhik himself would have secretly taken lewd photos of her.

Pakhi cries, saying she didn't do anything intimate with Adhik as she got scared and hugs her mother.

© Copyright tellybest.com, 2022, 2023. All Rights Reserved. Unauthorized use and/or duplication of any material from tellybest.com without written permission is strictly prohibited.
Cached Saved on: Monday 21st of November 2022 05:56:25 AMCached Disp on: Saturday 10th of December 2022 02:45:17 PM