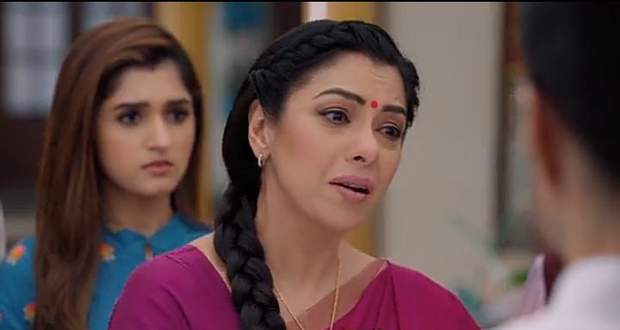 However, Devika tries to encourage Anupama by saying that she should fight for herself and tells her to do it to encourage other people.

Devika motivates her leaves after keeping the Ghunghroo box and the documents on the table while informing her that she will also be working for Anuj.

Vanraj looks at Anupama teaching the kids and gets happy thinking that his plan worked.

Meanwhile, Devika goes to meet Anuj and tells him to talk to her but he tells her that he will respect Anupama's decision.

Elsewhere, Hasmukh tells Leela that he doesn't want to talk to her as he is angry with her while Leela blames Anupama.

At night, Anuj gets angry at him and tells GK that he is angry at himself for hoping and that Devika told him about Anupama rejecting the offer.

Kinjal serves the Shah family sweets and Leela asks her the reason while Anupama that she is the one who is celebrating by sweets.

Elsewhere, the delivery boy also delivers the sweets to Anuj which confused him as to who might have sent it.

Anupama signs the papers and announces that she has decided to work with Anuj while Vanraj tries to snatch the papers but she stops him.

Leela argues with Anupama while she stands up for herself while Vanraj tries to put her down but fails.