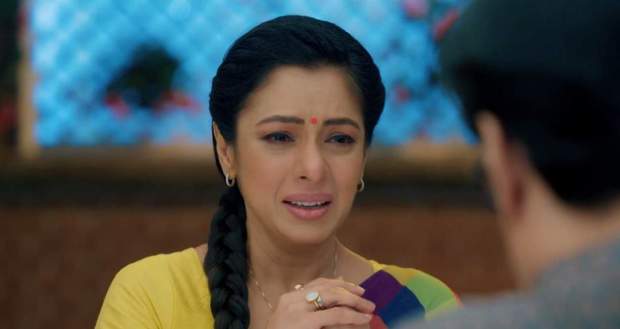 Today's Anupama 18th April 2022 episode starts with Paritosh saving Anupama from falling after getting a shock from the loose circuit board.

Paritosh gets protective of Anupama and asks her to work carefully while Anupama asks Paritosh to indulge himself in her happiness.

Anupama tells Paritosh how his absence will leave a hole in her happiness and leave it incomplete in her marriage.

However, Paritosh comes out of the kitchen without answering Anupama’s request but faces Samar standing in front of him.

Samar hugs Paritosh and asks him to join in for their mother’s once in her lifetime happy moment to make it memorable and special.

Hearing Samar’s words make Paritosh feel perplexed as Samar points out the numerous sacrifices that Anupama has done for their sake.

Pakhi comes and asks Anupama to stitch her lehenga a bit loose as she will wear it in the first function of her marriage.

Anupama gets overwhelmed with happiness and happily agrees to buy Pakhi a new lehenga for the marriage.

Spotting Paritosh, Pakhi tells him that she is ready to join in Anupama’s marriage and suggests Paritosh also follow her.

Later, Vanraj comes to Paritosh and asks him not to follow him in his life as he is not an ideal dad.

Vanraj asks Paritosh to join in Anupama and Kinjal’s happiness if he wants to be happy in his life.

Meanwhile, Anupama tells Anuj about Pakhi’s decision on the video call and jumps with joy and excitement.

Pakhi reminisces about her talk with Anuj which helped her change her mind and thanks Anuj over a text.

Anuj becomes a bit flirtatious but Anupama cuts off his attempts to cling to the call.

Both lovers coin out a new term called “I maan you” which expresses their feelings towards each other in simple words.