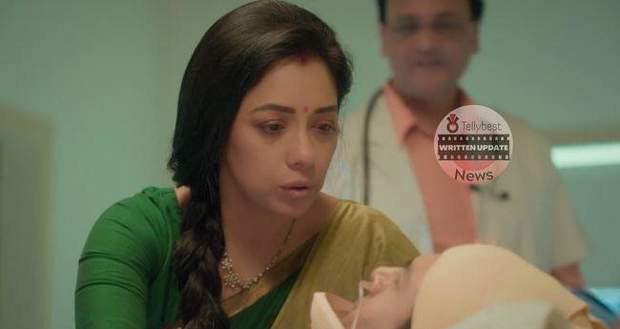 Ba thanks god for bringing Vanraj back while Vanraj requests him for a healthy recovery of Anuj too.

Ba tells Vanraj to rest while she brings him food but they get interrupted by Choti Anu who comes with a sketched moustache and scolds Vanraj for his way of driving.

She tells him that everyone was sad in his absence and calls him a friend of Anuj. This moves Vanraj and others and Vanraj hugs her.

Meanwhile, in the hospital, Anupama plays a game with Anuj in a coma and orders him to sit upright as she wins the game.

Suddenly, Anuj starts opening his eyes and speaks up in incoherent sentences that he wants to go home for Choti.

While Anupama is understanding and supports him Anuj blanks out again.

On the other hand, Barkha explains to Ankush and Adhik what he heard in the hospital making it clear that Vanraj is responsible for the accident even though Vanraj has lost his memory or faked it.

Barkha tells them to take things in their favor and her revenge on the Shahs.

In the hospital, the doctor explains that Anuj is showing good signs of recovery so Anupama asks him if she could take him home.

The doctor replies that extra care has to be taken for that and sometimes the relatives get tired of handling the patient’s mood swings so he asks her to think on it properly and then decide.

In the Shah house, everyone decides to celebrate Janmashtami since Vanraj got back and to pray for Anuj. Vanraj reminds that Anuj’s birthday is on Janmashtmi itself and Ba looks at him surprised.

Vanraj expresses his wish for Anuj to wake up on Janmashtmi and gets irritated with himself for losing his memory of the incident.

The family consoles him that they trust him even though Kavya looks at him suspiciously.

Barkha is about to go to the hospital when Anupama calls Ankush and tells him that Anuj is coming home.

On this everyone gets shocked and Ankush asks her if Anuj has woken up, on this, Barkha makes an exceptionally shocking and frightened expression.

However, Anupama tells Ankush that he did wake up only to pass out again but said he wished to go home, so she has decided the same.

Barkha tells Ankush to do something quickly before Anuj’s recovery.

In the Kapadia House, Anuj comes home on a stretcher and everyone energetically welcomes him.

Barkha again trolls Hasmukh for the blame on Vanraj pushing Anuj but Hasmukh stays silent and even asks Paritosh to not tell it to Anupama and destroy her happiness.

Meanwhile, Ba asks Vanraj why he is frustrated, Vanraj tells her that he is scared for Anuj and shocks Ba by saying what if he did push Anuj off the cliff since he can’t remember anything.

© Copyright tellybest.com, 2020, 2021. All Rights Reserved. Unauthorized use and/or duplication of any material from tellybest.com without written permission is strictly prohibited.
Cached Saved on: Friday 30th of September 2022 11:52:24 PMCached Disp on: Saturday 1st of October 2022 05:44:22 PM