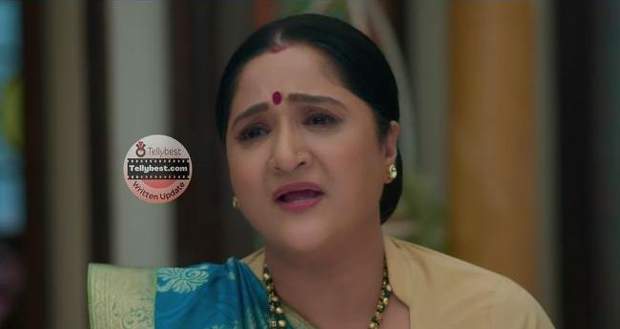 Meanwhile, Vanraj asks Anuj if his dialogues have ended and if they can start discussing some real thing out there.

Barkha says that she has done whatever she needed to do and filed an apprehension complaint against Vanraj and Pakhi.

Samar explains the meaning of apprehension complaint as a type of complaint where Barkha has stated that Vanraj and Pakhi can blame their family after committing any crime.

Vanraj goes crazy hearing Barkha’s words while Barkha states that she did everything to protect herself and her brother.

However, Vanraj boils in anger and threatens the Kapadias that he will destroy each one of them if anything happens to his daughter.

As Vanraj includes Anupama’s name in the list too, Anuj interrupts him and says that for that type of behavior, Barkha has filed the complaint.

As the argument between Anuj and Vanraj seem to get intense, Leela asks them to stop instigating each other and says that everything is Pakhi’s fault.

Leela says that Pakhi should not have included Vanraj in her and Adhik’s issue and blames Vanraj too for interfering in the husband-wife’s matter.

Hasmukh tells Leela that after a long time, she has reversed her opinion in the right direction.

Vanraj says that he can also file a complaint against Adhik for misbehaving and beating his daughter to which Anuj asks him to do so openly.

Anuj says that feminism means girls should get equal rights as men which includes equal punishment as them too.

As Vanraj determines to lodge the complaint and go to the extremities, Anuj asks him to resolve the matter within the family as the marriage will break if they go beyond that boundary.

Vanraj says that he does not care if Adhik-Pakhi’s marriage breaks or whatever but Pakhi interrupts him saying that she cares very much about that.

Pakhi shifts the entire blame to Vanraj and accuses him of trying to break her marriage when he is supposed to resolve it.

Pakhi asks Vanraj why he did not make her understand her mistakes and instead went away to warn Adhik.

Vanraj stands blankly while Anupama enters the house clapping her hands in amusement.

Anupama says that Pakhi is breaking her records at being selfish and impolite day by day and there is no end to it.

Anupama reminds Pakhi how her father was the only person who fought with others knowing that she is wrong and asks her to at least respect that.

Pakhi says that she is least bothered by those things and wants to live with Adhik at any cost.

Just then, the police enter the house and ask Pakhi and Vanraj to come forward as Barkha has lodged a complaint against them.

Anupama gets anxious seeing the situation as no matter which family wins, she will be on the losing side.