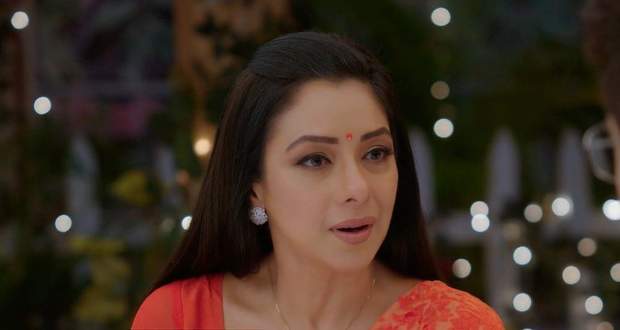 Today's Anupama 18th February 2022 episode starts with Anupama explaining how she feels for Anuj for the past months.

She tells Anuj that her heart gave the signal to her much earlier but she couldn’t convince herself to confess that to him.

Pointing out events from the past, Anupama explains to Anuj how she was head over heels for him even before she came to realize it herself.

Anupama confesses that she thought of telling her feelings to him many times but was unable to do so but today she will succeed no matter what.

Listening to Anupama awkwardly talking about herself, Anuj continues to giggle with excitement and happiness as he listens to her words.

Meanwhile, Kinjal comes back from the restaurant after waiting for Toshu for hours and sees him talking with a client without any tension in his mind.

She feels hurt and betrayed on seeing the club entry stamp on Toshu’s hand and leaves after throwing the roses at him in anger.

Coming into the room, Toshu asks Kinjal why she was acting so crazily, Kinjal answers she was the crazy one who thought that she would be able to recover their relationship.

Toshu tries to convince Kinjal that he was busy with work and that is why he could not come to meet her but Kinjal erupts with frustration and tells him that he should learn work-life balance.

She starts to cry in disheartenment as she is the one always waiting for Toshu to come to her.

Coming back, Anupama prepares herself to say the final words to Anuj and tells him that she will not say “I love you” to him.

Instead, she tells a piece of poetic lines and proceeds with her confession by saying seven magical words “I want to grow old with you” asking Anuj to spend his life till death with her.

Anuj feels elated with happiness as he holds Anupama’s hands and gets emotional about his love story getting completed.

They cut the cake together and wipe away each other’s tears while eyes fixed on each other dripping with love.