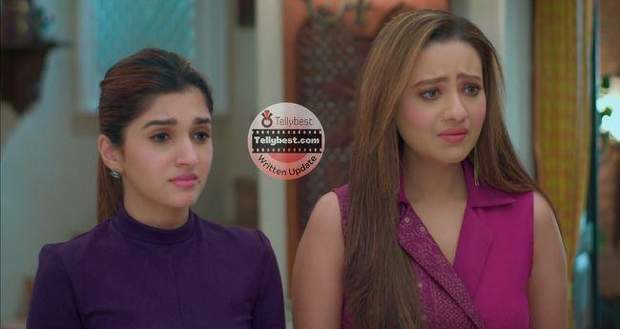 Today's Anupama 18th January 2023 episode starts with Dimple asking Anupama if she is feeling okay seeing her stand there blankly.

Anupama replies that she is absolutely fine and asks Dimple what happened in that house regarding Toshu.

As Dimple hesitates to say everything to Anupama, Anupama gets a call from Leela saying that she wants to talk to her.

Meanwhile, Samar gives headache medicines to Vanraj and asks if they can still retrieve Leela’s jewelry from Jayanti Bhai.

Vanraj assures Samar that they will bring back the jewelry as he has given them as a guarantee and at the same time Samar gets a call from Dimple.

Samar widens his eyes on hearing Dimple on the other end and looks at Vanraj.

At the same time, Anupama asks Leela to come inside the house but Leela refuses as she is determined to never enter that house again.

Leela says that she intended to never come back to Anupama and Anuj’s house again but whatever Anupama did earlier has made her helpless.

Leela starts with her blaming game and says that Anupama has taken away all the happiness and peace of the Shah family.

Without letting Anupama speak, Leela says that everyone in their family is falling apart whereas she is enjoying her life with her husband and daughter.

Leela announces that Anupama has cursed the Shah family and because of her, no one in their family is happy in the present.

Dimple feels frustrated hearing Leela’s comments as she hears the entire conversation from a distance.

Anupama asks Leela to stop with her nonsense for one moment and says that Leela is spouting whatever in her anger.

Anupama makes it clear that up to date, she has always prayed for good things for the Shah family, even more, compared to her own family.

As Leela questions Anupama about her refusal of help in Toshu’s case, Anupama accepts that she denied helping Toshu despite her being his mother as it was the right thing to do.

Anupama tells Leela that helping Toshu with his mistakes will make him more irresponsible and dependent on others.

Further, Anupama asks Leela to return to her house if she has come to say such things to her and bids goodbye.

However, Leela says that even if she has done many bad things toward Anupama, she has never thought badly of her.

Leela says that her curse will surely affect Anupama the same way the Shahs are experiencing grief in the present.

Dimple loses her patience and asks Leela what she is even saying while Leela leaves Anupama’s house.

Vanraj appears and leaves after Leela while Anupama finds herself in tears hearing such harsh words for no reason.

After returning, Vanraj asks Leela why she said such things to Anupama when they decided to leave Anupama out of their family problems.

Leela says that she was angry after seeing that Anupama denied help to her son and is happy with her new husband and daughter.

Vanraj tells Leela not to wish bad things for someone, especially Anupama, as she has done numerous things for them.

Asking Leela to rest, Vanraj takes Leela to her room and asks her to go to sleep while Hasmukh is already asleep.

Meanwhile, Anupama decides that she will not let Leela’s words affect her and comes to her room to find Anuj putting Anu to sleep.

Anupama tells Anuj that even though she loves Anu with her whole heart, she cannot match his love for Anu as fathers have a special place for their daughters in their hearts.

Anupama and Anuj end the day on a happy note as they discuss Anu’s hobbies and the celebration of Makar Sankranti with their daughter.

© Copyright tellybest.com, 2022, 2023. All Rights Reserved. Unauthorized use and/or duplication of any material from tellybest.com without written permission is strictly prohibited.
Cached Saved on: Wednesday 25th of January 2023 09:50:38 AMCached Disp on: Thursday 9th of February 2023 04:28:22 AM