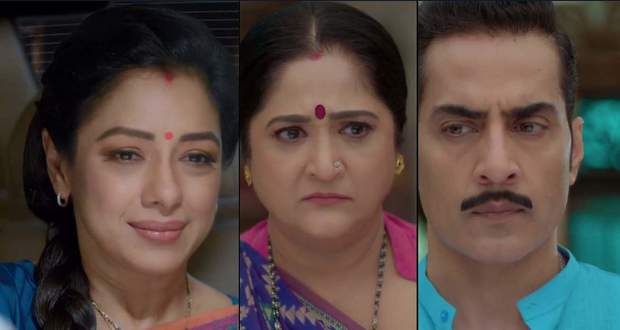 Today's Anupama 18th July 2022 episode starts with Anupama and Anuj telling everyone that it was their choice to keep the matter to themselves and not tell anybody.

Kavya full-fledged supports Anupama and Anuj’s decision and goes with Anupama to let her talk with the children alone.

While Anuj talks with Hasmukh and others, Vanraj goes aside with Leela and says that Anuj has planned everything very carefully.

Vanraj says that Anuj has brought Anu because he wants his entire property and business to go to Anu instead of Anupama’s children.

Meanwhile, Kavya tells Anupama that she gets inspired by her actively and applauds Anupama’s bravery in adopting a kid at such an age.

Anupama thanks Kavya heartfully and shares a hug with her.

Later, Anupama sits with her Toshu, Samar, and Pakhi to talk with them regarding Anu.

Toshu tells Anupama that she should never have brought Anu in such a time when Kinjal is in her last stages of pregnancy.

At the point where he is going to be a father, Toshu mocks having a new sister.

Toshu also complains about how he feels really bad when he hears Anu calling Anupama her mother to which both Samar and Pakhi agree.

Pakhi says that they are jealous of Anupama’s new child as she will get the most attention from her now.

However, Samar asks Toshu to see the situation from Anuj’s point of view once and try to understand his desire of wanting to become a father.

Pakhi agrees with Samar that they can be upset with this decision but they do not have the right to strip Anuj from his happiness.

Anupama holds onto their hands and thanks them for understanding her while apologizing and asks them to give Anu a small place in their lives.

Elsewhere, Kavya makes hot chocolate for Anu while Kinjal feels anxious about Anupama being there for her baby.

Kinjal tells Kavya that it will be difficult for Anupama to be there for Kinjal’s baby when she herself has the responsibility of a child.

However, Anupama comes and assures Kinjal that she has not forgotten her promise of taking care of her baby.

On the other hand, Samar asks Toshu to stop blaming Anuj for bringing Anu as he himself wants Anupama to look after his own baby all the time.

Later, Anuj, Anupama, and Anu bid goodbye to everyone and leave the Shah residence.