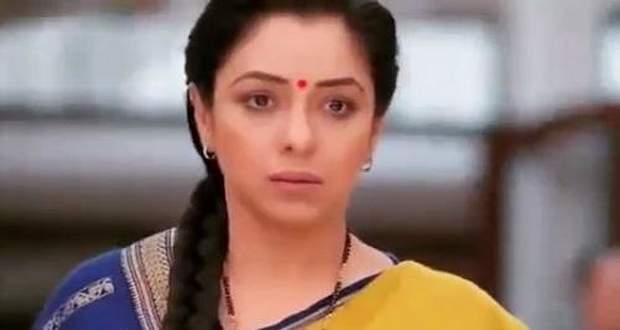 Today's Anupama 18 March 2021 episode starts with Anupama entering her room. She sees the family picture and cries. Anupama hugs the picture and packs her bag.

Kavya stands outside Anupama's room and smirk. Anupama comes out and Kavya says to her that Vanraj is angry but he never asked her to leave the house. S

he also says she knows that it is difficult for both of them to stay under the same roof but she is feeling bad that she is leaving the house.

Kavya asks Anupama if she has decided to leave the house then before leaving she should clear to all the family members that it is her decision and neither she nor Vanraj forced her.

Anupama replies to her that she will do it. Kavya hugs Anupama and smirk.

Vanraj gets irked and says he is fed up with Anupama's goodness. He also says that the one who wants to leave goes silently and not like Anupama who is gathering all and informing.

Vanraj also says Anupama can only say but she cannot leave. Anupama gets adamant to leave. Vanraj leaves the space. Kavya thinks why Anupama isn't leaving.

She bid adieu to Anupama. He order Paritosh to drop Anupama.

Vanraj asks kavya if Anupama left. Kavya says she is ready to leave.

Hasmukh asks Anupama that before leaving she should tell her what they will tell Pakhi. He says Sweety needs them both Vanraj and Anupama.

Anupama thinks of Sweety and stays back. Hasmuk and Shah sigh relief.

Leela Praise Hasmuk for stopping Anupama. Here, Kavya manipulates Vanraj. She asks Vanraj to talk to Hasmukh about the property.

He alerts kavya not to be impulsive towards his family. Kavya gets angry with Vanraj.

© Copyright tellybest.com, 2020, 2021. All Rights Reserved. Unauthorized use and/or duplication of any material from tellybest.com without written permission is strictly prohibited.
Cached Saved on: Sunday 9th of May 2021 03:25:37 AM