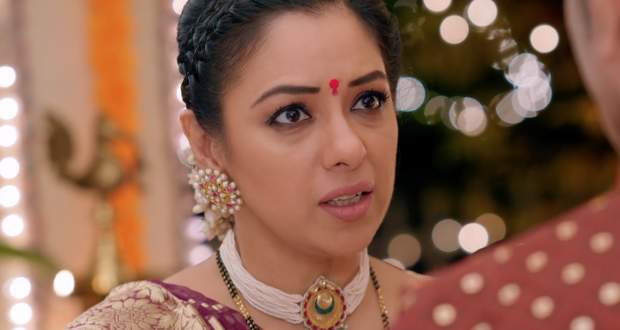 Today's Anupama 18 Nov episode starts with Anupama taunting Vanraj for having an ego. Vanraj is not ready to bow down in front of anyone while Anupama wants him to apologize to everyone.

Vanraj thinks Anupama is clever and has been acting for 25 years. Anupama suggests that she might have made mistakes but his mistake is bigger than anything else.

Vanraj asks Anupama to shut up while Anupama loses patience and answers back. Vanraj raises his hand while Anupama holds it mid-air.

Anupama states that he doesn’t even deserve to get Prasad and leaves. Later, Anupama enjoys Diwali with family while Vanraj stands alone upstairs.

In the morning, Kavya receives flowers and gets happy to think they are from Vanraj. However, the flowers are from Anirudh and she gets upset.

She wonders if Vanraj will ditch her just like Anupama. Meanwhile, Anupama takes blessings from Baa and Bapuji on the occasion of the Hindu New Year.

Further, Vanraj feels lonely as he feels left out. He calls Kavya and apologizes. He also shares his pain and wishes to go on a vacation with her.

He tells his family that he is going for a meeting in Hyderabad. Elsewhere, Rakhi Dave plans to spoil Shah family's happiness. Later, Bapuji asks Anupama to go for a walk with him every morning.

Upcoming Anupama episode update: Rakhi Dave finds Vanraj and Kavya at a resort and plans to spoil their name.