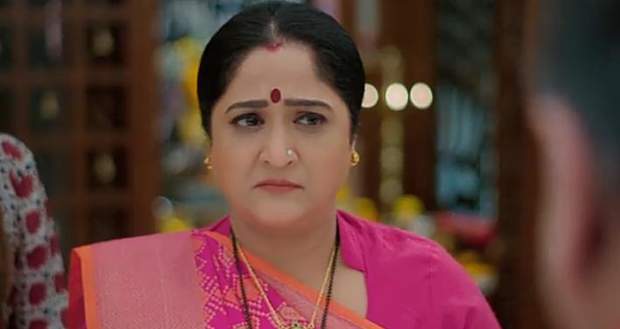 Today's Anupama 18 November 2021 episode starts with Anupama trying to convince Hasmukh to eat sweets while Jignesh comes there and tells Hasmukh that he came to with him.

He apologizes to Anupama for coming to her house without informing her and requests her to let him stay with Hasmukh.

Samar comes there and brings breakfast for them while Vanraj calls Jignesh but Hasmukh tells them to not accept the call as Vanraj might react badly to the situation.

Just then, Kavya comes there with Leela and requests Hasmukh to forget everything and return to Shah's house.

Anupama holds Hasmukh's hand for support while flashback shows Kavya instigating Leela against Anupama saying that she is trying to snatch the family.

Leela tells Hasmukh to come with him and behaves rudely with Anupama.

However, Hasmukh removes his hand from Leela's near the door and locks them outside saying that he will not return to Shah's house.

Elsewhere, Vanraj returns to Shah and questions Paritosh about the house being empty while he lies that the family went to the temple.

Leela bangs on the door and tries to apologize to Hasmukh but he refuses to open the door.

Leela curses Anupama to open the door after which Hasmukh drags her inside.

She tries to justify her anger while Hasmukh argues that everything she is suffering through is her fault.

Leela stops Anupama from interfering and Hasmukh scolds Leela after which he begs Leela to let him live peacefully with his daughter.

Leela leaves while Kavya gets Vanraj's message and panics while Anupama goes after Leela.

© Copyright tellybest.com, 2020, 2021. All Rights Reserved. Unauthorized use and/or duplication of any material from tellybest.com without written permission is strictly prohibited.
Cached Saved on: Thursday 20th of January 2022 04:42:08 AM