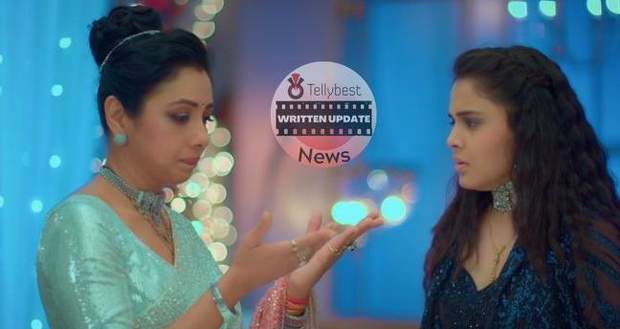 Today's Anupama 18th November 2022 episode starts with the Shahs returning to their house in a gloomy mood after the function.

Leela spots Vanraj calling someone and asks him if he is calling Pakhi by any chance.

Vanraj tells Leela that he plans to bring Pakhi and Adhik to their home as they have nowhere to reside.

Leela announces that what Anupama did with Pakhi was absolutely right and she deserves to suffer for a bit.

Everyone gets surprised a bit on seeing Leela siding with Anupama but acknowledges that Pakhi is getting back what she sowed.

Meanwhile, Anupama tells Anuj to take her and Anu somewhere out of the house as she feels uncomfortable staying there.

Anuj and Anupama plan a trip for themselves after dropping Anu at her school camp which she could not attend due to the marriage.

At the same time, Pakhi criticizes Anupama as a mother after she threw her out of the house.

Pakhi says that Anupama always looks for opportunities of becoming great and distribute lectures to everyone.

Pakhi groans in sorrow as she asks God what type of parents she has got.

Adhik asks Pakhi to realize that they are in the current situation because of her mistakes.

Adhik reminds Pakhi that neither the Shah house nor the Kapadia house is their home and it was just Anuj and Anupama’s kindness that they were staying there.

Adhik assures Pakhi that he is trying his best to provide Pakhi with comfort and she should at least try to be on his side.

The next day, Anu, Anupama, and Anuj take a picture of themselves after getting ready to leave but the picture comes out damaged.

Ankush comes and asks where they are off to, to which Anuj replies that they are going on a trip for 2 days out of town.

Anupama calls Barkha to talk, but Ankush informs them that Barkha has left for work in Mumbai.

Anupama tells Ankush that it was Barkha who instigated Pakhi and so, she also deserves a fair punishment.

Anuj and Anupama ask Ankush and Barkha to get out of the house as they cannot stay together anymore.

Ankush understands the situation and shares a loving hug with Anuj asking him not to get too upset over the matter.

Adhik comes to get Pakhi’s mobile and informs Anupama and Anuj about their living conditions and calls Anupama his mother.

After everything gets resolved, Anuj, Anu, and Anupama leave for their trip but Anupama gets an eerie feeling.

They get interrupted as soon as they leave the house gate by a truck standing in the middle of the road making Anupama worried.

Meanwhile, Vanraj tries to go to meet Pakhi but Leela and others stop him and ask him to leave Pakhi to let her learn a lesson.

Vanraj questions Anupama’s motherhood saying that she is going on a trip after throwing Pakhi out of the house.

Leela and Kavya ask Vanraj to stop blaming Anupama for everything and ask him not to help Pakhi in any way.