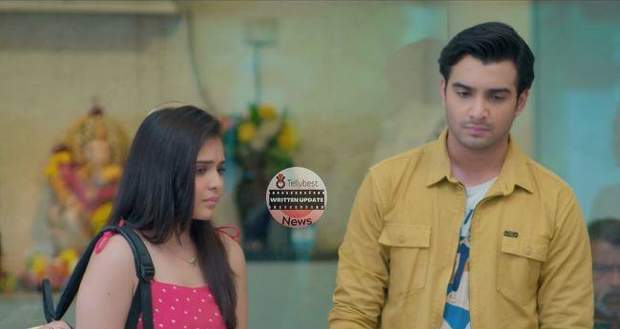 Today's Anupama 18th October 2022 episode starts with Pakhi telling Anupama that she did nothing wrong with Adhik as she is aware of her line very well.

Leela comments on that and says that Pakhi is acting like that to melt Anupama so that she can hide her misdeeds.

Pakhi tells Leela that she just came to the resort with Adhik to spend time with him in privacy and genuinely loves him.

Before anyone could tell anything more, Pakhi declares that she and Adhik are in love with each other and want to marry.

Anupama gets shocked to hear such a thing from Pakhi and tells her that it is not her age to think about marriage.

Anupama gives examples of village girls and even herself and portrays how girls try to resist marriage at such a young age because they want to build their careers.

However, Pakhi does not understand Anupama’s point and insists that she wants to marry Adhik as soon as possible.

Leela denies accepting Adhik as her grandson-in-law and tells Pakhi that her marriage will be with a man of her choice which angers Pakhi.

Anupama calms down everyone and says that they will talk about the matter after going home.

Meanwhile, Barkha asks Adhik in the car why he took Pakhi to the resort when he was just going to use her.

Adhik says that he has changed his mind and loves Pakhi genuinely infuriating Barkha.

Barkha says that she will never accept Pakhi as Adhik’s wife and asks him to get the idea of marriage out of his head.

Anupama goes through an emotional breakdown in front of Rakhi and tries to figure out how she is going to handle things.

After Barkha and Adhik return home, Anuj and Ankush get surprised to see them together and ask the reason for early return.

Barkha reveals that Adhik took Pakhi to the same resort as them and both got caught in the act by the family.

As Ankush and Anuj try to warn Adhik, he says that he loves Pakhi truly and will marry her even though the families do not accept the decision.

On the other hand, Anupama and the others return to the Shah house with Pakhi and say that they found her on their way.

Rakhi takes off with Kinjal and Pari and assures Anupama that everyone is on her side.

Suddenly Leela starts crying and loses unconsciousness while trying to tell Vanraj about the incident.

The doctor checks Leela and says that she may need to be admitted if her blood pressure does not become normal.

Pakhi feels guilty after seeing Leela’s condition and gets frightened of what will happen when Vanraj gets to know the truth.

Vanraj asks Samar to look after Leela and Hasmukh and eyes Anupama and Kavya, asking them to come outside with him.

© Copyright tellybest.com, 2022, 2023. All Rights Reserved. Unauthorized use and/or duplication of any material from tellybest.com without written permission is strictly prohibited.
Cached Saved on: Monday 21st of November 2022 07:25:51 AMCached Disp on: Thursday 1st of December 2022 03:04:53 AM