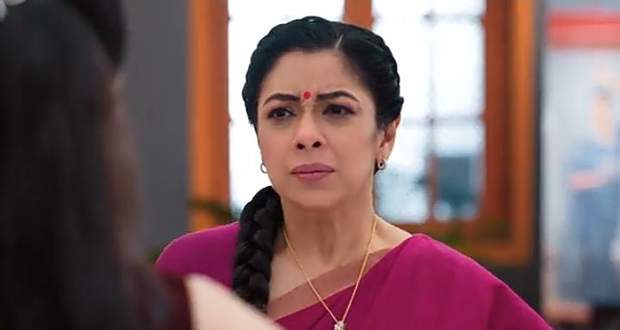 Today's Anupama 18 September 2021 episode starts with Bapuji scolding Kavya for trying to humiliate Anupama while Anupama gives her a befitting reply and shits her mouth.

Vanraj says that Anuj is just favouring her while Anupama says that they might know of Anuj's intentions but Leela knows her since 25 years and trusts her but Vanraj argues with her.

Kavya taunts her saying that she is being selfish while Anupama says that she is just looking at her goals.

Vanraj says that she will fail while she tells him that she is okay with failing as she is content with knowing that she tried.

Anupama tells Hasmukh that she will go to Anuj's office the next day and he along with Kinjal and Samar praise her leaving Vanraj jealous.

Anu returns to her room and cries while Kinjal and Samar console her.

Vanraj exercises to vent his anger while Kavya taunts him saying that they will look like losers if Anupama becomes their boss.

Elsewhere, Anuj smiles seeing his pictures with Anu and the rose from his diary while GK teases him asking if Anupama will come or not.

The next morning, Anupama and Kinjal serve breakfast while Leela tells Kavua to serve her breakfast and taunts Anupama following by Kavya taunting Anupama next.

Anupama replies to Kavya and Vanrah starts arguing with her for fighting with Kavya while other family members start arguing with each other.

Leela taunts Anupama saying that she is the reason behind all the arguments.

Upcoming Anupama episode update: Anupama tells Anuj that she was to keep a strictly business-only relationship.