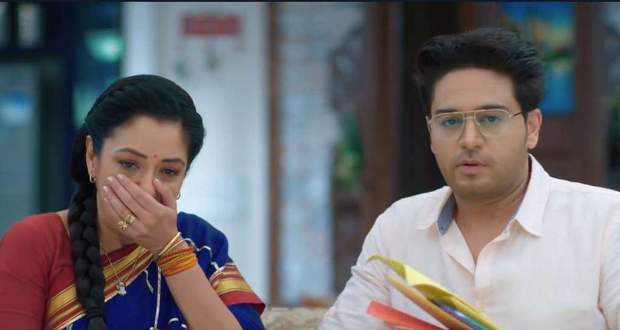 Today's Anupama 19th April 2022 episode starts with Anuj coming into the Shah residence hastily and announcing that he has brought a special surprise with him.

Vanraj enters with four huge bags full of content which leads to Leela starting to complain about Vanraj getting engaged in Anuj and Anupama’s marriage.

At Samar’s suggestion, Anupama and Anuj open the bags together while the others feel excited to discover what is there inside.

Anuj, Anupama, and Pakhi discover letters and gifts addressed to MaAn from various parts of India and even foreign countries like New York and Toronto.

Kavya inquiries about Anuj’s relatives but gets to know that all these are not sent by relatives of either family.

Feeling excited, Anuj opens one letter and smiles happily as he informs others that the letters are from the people who have seen the video of Anupama proposing to him.

Samar, Kinjal, Pakhi, and Hasmukh read out some of the letters that express gratitude, appreciation, and sincere blessings for Anuj and Anupama.

Getting shagun money and a silver coin, Anupama sheds tears feeling overwhelmed with joy and happiness after seeing such an immense amount of love.

Kavya tries to spoil the mood by reading out a hate letter but fails as Anuj and Anupama laugh it off gracefully.

Hearing Kavya, Hasmukh tells Anupama to always accept the loving wishes over the negative minds of people who cannot stand the happiness of others.

Later, Leela warns Dolly not to get involved in Anupama’s wedding as it will bring shame into her life.

However, Dolly reverts to Leela by asking her to keep her nose out of other people’s business and not cause unnecessary problems.