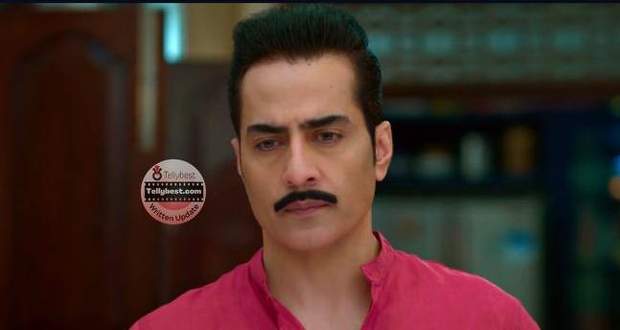 Today's Anupama 19th December 2022 episode starts with the police officer asking Vanraj and Pakhi if the complaint lodged against them is valid or not.

Vanraj says that he will answer every question of the police but first he wants to lodge a complaint against the Kapadias.

The neighbors gather outside the house and start commenting on how Pakhi is responsible for breaking the marriage.

Leela hears the whispering murmurs and tells the police that no one is lodging any complaint against anyone and it is just a mere fight between two young adults.

The police get enraged as Leela asks them to go away as they have nothing to do there.

Hasmukh comes forward and tells the inspector that he is apologetic from Leela’s side as she got nervous after seeing the police arrive.

Hasmukh tells the police that Barkha’s complaint against Vanraj and Pakhi is absolutely right which leaves everyone shocked.

Explaining to the inspector how Pakhi tried to threaten Adhik by blackmailing him by using suicide as a cause, Hasmukh says that he is ashamed of his granddaughter’s actions.

The police inspector asks Pakhi to step forward and tell them everything from start to end with no lies.

Pakhi grabs Anupama’s arm with fearful eyes and shows resistance to going there but Anupama asks her to do as the police say if she wants to save her marriage.

Pakhi comes to the police and tells them everything from the start and how the whole thing turned into a mess.

As the police inspector bursts into anger for Pakhi’s misuse of laws that are made for the protection of women, Pakhi apologizes to them and says she is remorseful for what she did.

The inspector says that a police case can destroy lives and asks Vanraj and Pakhi to sign an undertaking that assures that if Pakhi takes such a step in the future, the other side will not be responsible.

The police leave after giving Pakhi and Vanraj a warning after which everyone becomes silent and calm.

Vanraj apologizes to everyone for his mistake and accepts that it is his fault for siding with Pakhi.

Anuj says that what was bound to happen has already been over and asks Pakhi and Adhik to decide what they will be doing.

Barkha says that living with a girl like Pakhi is very difficult as she is so immature and non-sensical.

Pakhi asks Adhik to resolve their fight as she is sorry for her mistakes but Adhik says that Barkha is right.

Adhik says that he loves Pakhi immensely but he is tired of living his life in anxiety and fear of getting into a fight with her and trying to manage everything by himself.

Saying this, Adhik announces that he and Pakhi should live separately for now leaving everyone silent.

Pakhi starts to cry and asks Adhik to not leave her like that but Adhik walks out of the house followed by the Kapadia family.

Seeing that no one is trying to stop them, Pakhi runs outside and hugs Adhik so that he cannot leave her.

Pakhi says that she will change herself according to Adhik’s wish and begs him not to leave her behind.

As Pakhi says that it was Vanraj and Leela who instigated her and Anupama who tried to brainwash Adhik, Adhik asks Pakhi to stop talking.

Pakhi falls to her knees and begs Adhik not to leave her but Adhik remains stern about his decision.