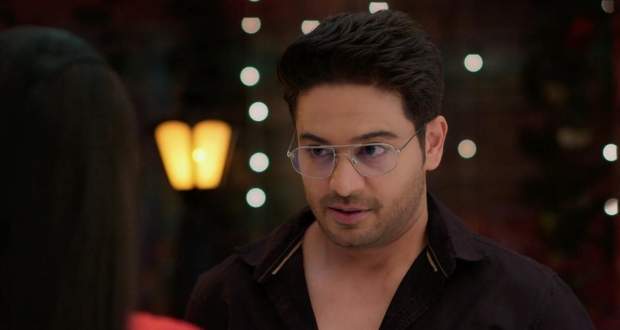 Today's Anupama 19th February 2022 episode starts with Anuj and Anupama returning to their apartments from the rooftop while holding hands.

Anuj suggests they should have spent the whole night on the rooftop together, Anupama scolds him for being unrealistic and sends him to his apartment.

After several bye-bye sessions, Anuj and Anupama finally go inside their own houses while giggling to themselves.

Meanwhile, Kinjal emotionally bursts out in front of Toshu as he ditched her plan of sharing a romantic dinner.

She emphasizes how she has got lonely in their relationship as Toshu never has time to spare for her.

Toshu hushes Kinjal up with a scream as she was comparing themselves to Vanraj and Anupama.

Both go their ways broken with pain and frustration.

The next day, Anupama rushes to open the door after hearing repetitive knocks and finds Anuj outside.

Anuj asks her if the previous day’s incident, her telling him all that was true or not.

Anupama pinches Anuj to make him believe that he is not dreaming.

On the other hand, an unstill awkwardness settles among the family members as everyone gathers in the living room.

Kavya clings to Vanraj closely while Kinjal and Samar remember Anupama for not being there.

At the same time, Anuj and Anupama start their day in a happy mood. Both eat their breakfast together and their work schedule for the day.

Suddenly Anuj starts vibing to a song playing on the radio in which Anupama joins him gladly, both share a good time and laugh their hearts out.

Later, as Anupama visits the Shah house, Vanraj starts his showering of insults and comments towards Anupama and congratulates her for her live-in.

Anupama answers that she and Anuj are living in separate houses but still Vanraj belittles her character.